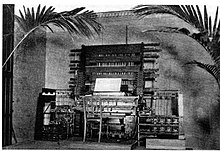 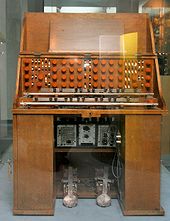 As early as the 18th century, experiments were made with the use of electricity in the field of music. The first instrument of this type is the Denis d'Or by the Moravian preacher Vaclav Prokop Diviš from 1753. The functionality of the prototype, which soon disappeared, remained unclear; One suspicion is that the strings of the clavichord- like mechanical instrument were statically charged, probably to scare the player. The first well-documented and preserved electrical instrument is the Clavecin électrique by Jean-Baptiste Delaborde from 1761: it used frictional energy to transmit signals. Both devices were praised as electrical instruments in their time , but according to today's definition, they could not be assigned to either electronic or electromechanical instruments.

The Musical Telegraph by Elisha Gray from 1874 is regarded as one of the first electronic musical instruments , which already used a simple electrical oscillator to generate sound. The instruments that followed in the decades that followed initially made use of analog forms of synthesis , often in combination with electronic filters to create timbres . These include the Telharmonium developed by Thaddeus Cahill in 1897 , the Theremin (Russia) introduced by Lev Sergejewitsch Termen in 1919 , Les Ondes Martenot by Maurice Martenot (France) in 1928 , and the Trautonium by Friedrich Trautwein (Germany) in 1930 . Later developments include the electronic organ , the synthesizer such as Moog 's modular system or today's digital piano .

The group of electrophones was not added to the Hornbostel-Sachs system as an independent group until 1948 .

The first digital synthesizers appeared in the 1980s , the first affordable and widely used instrument to be mentioned here was the Yamaha DX7 , which enabled completely new sounds to be made using FM synthesis and equipped with the recently introduced MIDI interface to enable completely new ways of making music . This interface made it possible to record and play back note events with the computer. This made it possible to produce any number of complex pieces of music purely from the computer. Samplers also made it possible to digitally save recorded natural sounds and call them up at any pitch using a master keyboard . "Sampled" musical instrument sounds are nowadays available in a large selection in most keyboards for beginners, but as instrument imitations run counter to the idea of ​​electronic musical instruments with their own sound.

Towards the end of the 20th century, personal computers became more and more powerful and software suitable for sound processing and synthesis was increasingly used. Complete studios can be mapped in software in the computer, thus enabling musicians with a smaller budget to easily create high-quality sounds on their home computer with the help of sound cards (see computer music ).