Robert Moog with some of his synthesizers in the early 1970s

Robert Arthur "Bob" Moog ( English : [ ˈɹɑːbɚt moʊg ]; * May 23, 1934 in New York City ; † August 21, 2005 in Asheville , North Carolina ) was a pioneer of electronic music and the inventor of the Moog synthesizer , one of the first widely used electronic musical instruments.

Moog studied physics at Queens College in New York City, which he graduated with a bachelor's degree. In the 1960s he built the first Moogtonium synthesizer for the composer Max Brand . In 1963 he received his PhD in electrical engineering from Cornell University (Ithaca, New York) .

After leaving Moog Music in 1977 , Moog taught music technology at the University of North Carolina at Asheville from 1989 to 1992 .

In 1984 Robert Moog chaired the expert jury for the Grand Prix of Ars Electronica ( Linz / Austria for pioneering new developments in the field of electronic sound generation).

In April 2005 Robert Moog was diagnosed with glioblastoma . He died of this incurable brain tumor four months later at the age of 71. His work is carried on by the Bob Moog Foundation, which his son founded after his death . 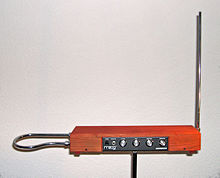 Etherwave Theremin, built from a kit

Before the synthesizer was developed, there was another electronic musical instrument, the theremin , which is still very popular today thanks to its unusual, contact-free operation. In addition to its inventor Lev Sergejewitsch Termen (whom Moog first met in Paris in 1989), Moog was also important for its further development.

He discovered it for himself as early as 1949 and built his own theremin. After he wrote an article about it for the journal Electronics World and also offered kits that were very successful, he and his father began building theremines in 1954 under the name RA Moog Co. in the basement of their parents' house in Flushing near New York. In the 1960s he released a kit for recreating a transistor thermin with great success . His personal highlight, however, was when he was allowed to repair Clara Rockmore's theremin - one of the two best artists on the instrument - at the end of the 1980s. To this day, Moog Music Inc. is the leading provider of high quality theremins.

Moog's Theremines have been used for years as background music for science fiction films and series, Mars Attacks! and Babylon 5 are just two examples. 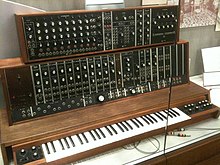 Moog made the first developments of components for the later synthesizer at the Columbia-Princeton Electronic Music Center , today the Computer Music Center . These were, for example, the voltage controlled oscillator ( VCO ) and the ADSR envelope generator .

The first synthesizers in the 1950s and early 1960s were either difficult to use - for example, with punch cards at the Mark II Music , which was located in the Columbia-Princeton Electronic Music Center - or they were enormous. Another decisive factor was that Moog was a student of Peter Mauzey , one of the developers of the Mark II Music . Moog presented its first synthesizer in 1964 at a congress of the Audio Engineering Society . Due to its compact size, it was initially just a curiosity because the configuration still took hours, but this was fixed by 1968. During this time Moog built the Moogtonium synthesizer with Fred Cochran for the home studio of the composer Max Brand . This oldest still functional synthesizer is now in the Max Brand Archive. During these years Moog also employed the musician Walter Carlos , who won three Grammys in 1968 with the album Switched-On Bach and thus triggered a musical revolution.

This was not the only reason why the Moog synthesizer was the most widespread, Moog was the only manufacturer to also supply a keyboard as an input device, which is where it defined the standards. While the first Moogs were still modular, so certain parts of the synthesizer could be exchanged for others, the Minimoog Model D came on the market in 1971, which combined all functions in a compact housing. The instrument had 44 keys, three oscillators with six selectable waveforms, an oscillator mixer and controls for treble and modulation. The third oscillator could also be used as an LFO (Low Frequency Oscillator). The Minimoog became the most popular monophonic synthesizer of the 1970s, more than 13,000 were sold by 1982 and since 2001 some special editions have been launched as the Minimoog Voyager .

Under Moog, the company brought the widespread and very popular Taurus onto the market in 1975 . Its pedals resembled those on an organ and produced synthetic bass sounds.

In 1977 Robert Moog left Moog Music . The company continued to produce keyboards until bankruptcy in 1986.

Moog moved to North Carolina in 1978 , where he founded Big Briar Productions , which developed and built effects modules and controls for electronic instruments. In 1982 a touch-sensitive keyboard was presented at the "International Computer Music Conference". In addition to the pressure on the keys, the keyboard also recognized the horizontal position of the playing fingers and thus offered new possibilities. Unlike the first synthesizers, Big Briar's developments didn't have that big impact on the music, but they were more creative and visionary.

At the beginning of the 1990s, Moog's first product, the Theremin, experienced a renaissance. Moog then designed the Series 91 and his company Big Briar produced it for the next five years. From 1998 he designed a series of analog effect modules called Moogerfoogers .

In 2002 Moog regained the rights to the Minimoog and Moog Music brands . In the same year, the Moog Minimoog Voyager appeared , which ushered in a new era with MIDI support.

In 2003 Moog worked together with Arturia on the ModularV and MiniMoogV.

For the hit Good Vibrations , the Beach Boys used an "Electro-Theremin" or "Tannerin" by Paul Tanner , which is a special, theremin-like instrument that is based on different physical principles than the theremin. When performing live, Mike Love played an instrument that worked with a resistance band (Moog Ribbon Controller).

After the introduction of the Minimoog in 1970, the Sound of the Moog spread in all conceivable musical styles from rock to rhythm & blues , from jazz to classical . One of the first rock musicians to Moog used them as supporting instrument was Keith Emerson , pianist with classical piano training at the publications Lucky Man, Tarkus , Trilogy , Brain Salad Surgery of supergroup Emerson, Lake & Palmer .

The list of hits that sounded with Moog sound is long - Frank Zappa , Stevie Wonder , Jean Michel Jarre , Chick Corea and Kraftwerk, as well as the occasional Beatles , the Rolling Stones and Grateful Dead Moog synthesizers, were used. Also world famous is Shine On You Crazy Diamond by Pink Floyd , who in 1975 used the Minimoog to imitate the sound of a trumpet. The Taurus, on the other hand, was famous for its "fat" bass and was used by Genesis , Rush , U2 , The Police and many others.

Moog set standards for controlling analog synthesizers. So he designed a logarithmic control for the pitch with 1V / octave and a separate pulse control signal. Many synthesizer manufacturers also orientated themselves on the construction of the Minimoog.

After analog synthesizers had been largely supplanted by digital ones, they experienced a renaissance in the 2000s . In addition to various effects devices, Moog-Music currently manufactures the successor to the Minimoog, the Minimoog Voyager (in different versions) and the “Little Phatty”, as well as Theremine and a MIDI interface for pianos. The latest product is the "Moog Guitar", which was presented in 2008 at the NAMM music fair .

On his 78th birthday (May 23, 2012) Moog was honored by the search engine Google with an interactive doodle .

For his life's work he received the Grammy Trustees Award in 1970, which is intended for achievements in music, with the exception of musical creativity.

In 1991 he was awarded the SEAMUS Lifetime Achievement Award . In 2001 Moog received the unofficial "Nobel Prize for Music" , the Polar Music Prize , and in 2002 the Individual Technical Grammy .

“Everything that emits sounds and can be changed with switches is a synthesizer. An instrument that you turn on and play, like the theremin, is not a synthesizer. But if you can adjust this and that, put a patch cord here and another there, and thus lead the quality of the sound into new areas, then you have a synthesizer. And there were many devices in front of mine. "