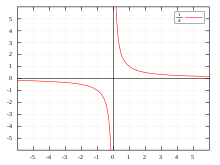 A real function has a sign change at this point if the function values change their sign from there. A distinction is made between the following two cases:

In the curve discussion , the so-called sign change criterion provides a sufficient condition for the presence of an extremum at a point. A differentiable real function has an extremum at the point if is and the sign changes at that point . The function then has

so one speaks of a real change of sign. The inequality condition states that the function in the two places and has a different sign (or is equal to zero).

According to the definition of a sign change, there are digits with in the interval . Now an interval nesting can be constructed with and so that for everyone

applies. To this end, the interval is successively halved and that particular sub-interval is selected for which the inequality condition is retained. The searched zero then results as

If a sequence of real numbers, which are all non-zero, then a sign change of this sequence is an index pair for which

Sturm chains are another tool for analyzing the zeros of real polynomials . If a polynomial is without multiple zeros and the number of sign changes of the (finite) sequence of function values ​​of the Sturm chain of is at the point , then according to Sturm's rule the number of zeros of in the half-open interval is just the same .