Graph of the square root function

In the logarithmic representation , the graph of the square root function becomes a straight line with a slope of  1 ⁄ 2 .

Preliminary note on the definitions

There are two problems to consider when formally defining the square root:

The symbol for the square root was first used during the 16th century . It is believed that the character is a modified form of the lowercase r , which is an abbreviation for the Latin word "radix" (root). Originally the symbol was placed in front of the radicand; the horizontal extension was missing. Even Carl Friedrich Gauss therefore used brackets for more complicated root expressions and wrote, for example, instead of

Graph of the square function (red and blue). By reflecting only the blue half at the bisector of the 1st quadrant, the diagram of the square root function (green) is created.

Equivalent to this, the real square root can be defined as a function: Let

the (bijective) restriction of the square function to the set of nonnegative real numbers. The inverse of this function is called the square root function

Properties and rules of calculation

Even if the square root of a natural number is to be taken, the result is often an irrational number , the decimal fraction expansion of which is therefore a non-periodic, non-terminating decimal fraction (namely precisely when the result is not natural). The calculation of a square root, which is not a rational number, therefore, is to determine an approximate value sufficient accuracy. There are a number of ways to do this:

Written rooting
This is an algorithm similar to the common method of written division.
Interval nesting
This procedure is quite easy to understand, albeit very cumbersome in practice.
Example (approximate value for ):

From and it follows that lies between 1 and 2. Therefore you try , etc. From and you can see that it must be between 1.4 and 1.5. Continuing this procedure with more and more decimal places finally delivers an approximate value with the desired accuracy:

Babylonian root pulling or Heron method
This iteration method is often used when programming the calculation of the roots for calculators because it converges quickly . It is Newton's method of finding zeros applied to the function .

be found because this series for pointwise to converge . With that results

Calculation using the CORDIC algorithm
This process is mainly used in calculators, FPUs and microcontrollers .

Determination of the square root graphically

One possibility is the Kathetensatz : The number whose square root is sought, is on a number line of coated out. A semicircle with a radius is drawn over the distance between and ( Thales circle ). At , a perpendicular to the baseline is established that intersects the semicircle (height of a right triangle). The distance from this point of intersection to the zero point is the square root of (cathetus). 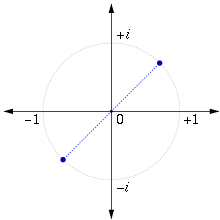 The extraction of the roots corresponds to bisecting the angle in the complex plane. Example:

If a complex number other than zero, then the equation has

exactly two solutions for , also known as the roots or square roots of . These lie in the Gaussian plane of numbers on the two points of intersection of the circle around 0 with the radius and the bisector of the angle between the rays emanating from or through . The one of the two roots that lies in the right half-plane is called the principal value of the root. For negative (real) values , the root with the positive imaginary part is the main value.

If you write the complex number in the form

where and are real with and , then the following applies to the principal value of the root:

The complex function “ square z ”, like the real square function, does not have an inverse function because it is not injective , but unlike real numbers it is surjective, that is, every complex number is the square of a complex number. Analogous to the real (non-negative) square roots, one can therefore define complex square root functions by restricting the domain of definition to a subset of the complex numbers on which is injective and remains surjective. Depending on which subset you choose, you get different branches of the square root function as the inverse.

is based on, this is the right half plane of the complex number plane , whereby only the numbers with nonnegative imaginary part belong from the edge . The restriction of to is a bijective mapping of to to the complex numbers, so its inverse function, the main branch of the square root of to, is entirely defined. The value of this inverse function is called the principal value of the square root of . If by a specific complex number is meant, then it is that main value.

Is given in Cartesian coordinates, i.e. with real numbers and , then results

for the main value of the square root, where the function has the value −1 for negative and the value 1 otherwise (also for and thus different from the sign function ):

The only side branch of is

Is in polar coordinates given with , the main value of the square root of

where is the real (nonnegative) square root of . The secondary value results again as .

Find the square roots of First, the amount of the radicand is determined:

This gives the main value of the square root to

The other root is obtained by reversing the sign:

does not apply to everyone , not even to the main values ​​of the roots. This can already be seen in the special case resulting from the further specification

who because of identity too

can be simplified, according to which apparently every negative number provides a counterexample, for example :

Square roots can also be defined in the remainder class ring . Analogously to the real and complex numbers, a square root of is called if:

First you determine the prime factorization

of the module and then the solutions modulo of the individual prime powers . These solutions are finally put together to form the desired solution using the Chinese remainder theorem .

The case is simple: Because of and modulo 2, every number has a uniquely determined square root, namely itself. For prime numbers not equal to 2, the square roots of :

To test whether it even has a square root in , one computes the value of the Legendre symbol

In the first case there is no square root in and in the second case it only has the square root 0. The interesting case is the third case, and therefore we assume in the following that it holds.

If the Legendre symbol is 1, then are

the two square roots of modulo .

If the Legendre symbol is 1, then are

the two square roots of modulo . Here one chooses so that

applies. You can simply test different values ​​of . The consequence is recursively through

Sample calculation for and :

According to the above formula, the square roots of through are

given. For one finds the value by trying , because the following applies:

The values ​​for and result as follows:

As the root of a square matrix is any matrix , which multiplied by itself result:

You can numerically approximate the specific integral function from 0 to with and a given function , which assumes the values at the equidistant interpolation points , as a matrix multiplication as follows (for ):

It is vividly clear that one can repeat this operation and thus obtain the double integral :

So one can understand the matrix as a numerically approximated integral operator.

The matrix cannot be diagonalized and its Jordanian normal form is:

To get a square root from it, one could proceed as described for the non-diagonalizable matrices. However, there is a more direct formal solution in this case as follows:

The indices denote the subdiagonals (0 is the diagonal) and the exponent is equal . If one assumes real and positive, then real and by definition is positive.

With this one can numerically approximate a "half" certain integral from 0 to the function as follows:

If you are looking for all operators which, when multiplied by themselves , result in the approximate integral operator , you also have to insert the negative sign, that is, there are two solutions .

To derive the formula, you can first invert, raise the result to the power and then invert it again.