stands for the set of irrational numbers 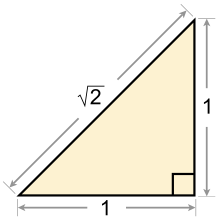 The number is irrational.

The number ( Pi ) is one of the best-known mathematical constants .

A real number is called irrational if it cannot be represented as a fraction of two whole numbers ; it cannot be written as with .

There are two types of irrational numbers:

The first evidence of irrational proportions was in ancient Greece in the 5th century BC. With the Pythagoreans . Definitions for irrational numbers that meet today's demands for accuracy can already be found in the Elements of Euclid . Translations into today's language of mathematics were first given by Karl Weierstrass and Richard Dedekind .

If you have a square with side length and calculates the diagonal , it follows from the Pythagorean theorem so . The positive solution to this equation is known today as . For Greek mathematicians, the question arose whether the length of this diagonal can be represented exactly by a ratio of two natural numbers and , that is, a fraction . A proof by contradiction, which is now taught in the school, handed down to us from Euclid. It is not known whether the discovery of irrationality occurred through the application of the Pythagorean theorem on a square or, as Kurt von Fritz said, through continuous division on the pentagram .

Older research in the history of science assumed that the discovery of irrationality led to a fundamental crisis in Greek mathematics or Pythagorean number theory. That is to say, one had previously assumed the basic premise that everything could be expressed by integer ratios, and the refutation of this view had shaken the Pythagorean worldview. An ancient legend was associated with this, according to which the Pythagorean Hippasus of Metapontium in the 5th century BC. BC committed a betrayal of secrets through the written announcement of this discovery and later drowned in the sea, which was interpreted as divine punishment. Some of the sources say that Hippasus himself discovered irrationality. Science historians today assume that there was no such crisis and that irrationality was not considered a secret. One possible explanation for the treacherous legend is that it came about through a misunderstanding, because the Greek adjective, which was used for "irrational" (in the mathematical sense), had the meanings "unspeakable" and "secret" at the same time. But it is also a fact that Greek mathematics changed fundamentally in the period after Hippasus.

Numbers whose irrationality has been proven

Numbers presumed to be irrational

The irrationality of the sum of and is suspected but has not yet been proven. For not a single pair of whole, of different numbers and it is known whether is irrational. However, it is known that in the case of the existence of rational linear combinations, the value assumes a constant value.

Proof of the irrationality of was presented in 2017.

Furthermore, it is unknown whether , , , , , the Catalan's constant or Euler's constant are irrational. However, it makes sense to suspect so.

The uncountability of irrational numbers

Cantor has further shown that the set of algebraic numbers , to which all root expressions belong, can still be counted. In addition, the algebraic envelope of every countable subset of real or complex numbers (such sets can consist of transcendent numbers in particular) is also countable, i.e. it certainly does not contain all real numbers.