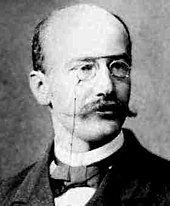 The Lindemann family moved to Schwerin in 1854 , where their father took a managerial position in his brother's gas factory. F. Lindemann passed his Abitur in Schwerin in 1870 and began studying mathematics in Göttingen in the winter semester of 1870/71 . In the summer semester of 1871 Lindemann heard Alfred Clebsch's lectures and made detailed notes of them. Later, under the supervision of Felix Klein, these served as the basis for a book about Clebsch's geometric lectures, which scientific friends of Clebsch suggested after his death in 1872. Felix Klein and Ferdinand Lindemann heard Clebsch's lectures at the same time. To write the book together with Klein, Lindemann followed Klein to the University of Erlangen , where he received his doctorate in 1873 with a thesis on the movement of a rigid body in a non-Euclidean geometry.

After a stay at the Polytechnic School in Munich and a study trip to England and France , Lindemann completed his habilitation in Würzburg in 1877 . From there, Lindemann accepted a call to Freiburg im Breisgau , where he received an extraordinary professorship as successor to Ludwig Kiepert in the same year. In 1879 Lindemann succeeded Johannes Thomae as full professor; also in Freiburg. His proof that the circle number is a transcendent number comes from this time (1882) (see Lindemann-Weierstrasse theorem ); this was the first proof that it was impossible to square the circle . Lindemann also proved that for an algebraic number not equal to zero is transcendent, from which it also follows that all natural logarithms of algebraic numbers not equal to 1 are transcendent. In 1884 he was elected a member of the Leopoldina .

The reward for this discovery was an appointment to the Albertus University in Königsberg , which Lindemann accepted on October 1, 1883. The mathematics practiced there was of worldwide importance in the 19th century. Extraordinary efforts were made to get Lindemann to Koenigsberg. Lindemann was awarded an extraordinary position , which he filled with Adolf Hurwitz ; Due to his Jewish descent, he had difficulties getting a permanent university position. In 1892/93 Lindemann was prorector of the Albertus University in Königsberg.

Lindemann married the actress Lisbeth Küssner in Königsberg. The children Reinhard Lindemann (1889–1911) and Irmgard Lindemann (1891–1971) emerged from this marriage. Together with his wife, Lindemann translated scientific works in a foreign language. Among them was the work La Science et L'Hypothèse by the French mathematician Henri Poincaré .

In 1893 Lindemann was appointed to the Ludwig Maximilians University in Munich, where he stayed for the rest of his life and held the post of rector in 1904/05. The physicist and Nobel Prize winner Werner Heisenberg originally wanted to study mathematics and presented himself to Lindemann in Munich; However, Heisenberg's brisk approach and his interest in mathematical methods in modern physics resulted in Lindemann harshly ending the conversation with the sentence: "Then you are already spoiled for mathematics anyway."

He is also known for the large number of his students, among whom such big names as David Hilbert , Hermann Minkowski , Arnold Sommerfeld , Martin Wilhelm Kutta and Fritz Cohn can be found. At his suggestion, Friedrich Böhm offered lectures in actuarial mathematics for the first time . He also campaigned for the modernization of teaching in Germany, for example through the use of seminars and current research results.

From 1895 he was a full member of the Bavarian Academy of Sciences . In 1905 he received the Bavarian Maximilian Order for Science and Art and in 1918 he was ennobled by being awarded the Knight's Cross of the Order of Merit of the Bavarian Crown .

The city of Munich named Lindemannstrasse in Untermenzing after Ferdinand von Lindemann.