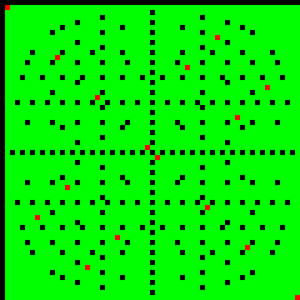 The residual class ring is shown graphically. More detailed explanation by clicking on the picture in its description.

In mathematics , a remainder class ring modulo a positive integer is an abstraction of the classification of integers in terms of their remainder when divided by .

This article deals with the algebraic definition and more abstract properties of residue class rings. For a simpler and more understandable introduction to the calculation rules, see the article Congruence (Number Theory) .

Are whole numbers with

The links are thus defined independently of the representative of the remainder class.

According to this convention, the remainder class ring consists of the numbers . Through the congruences

in the ring of integers we get results which, according to our convention, we can immediately interpret as results in . Every chain of arithmetic operations in this remainder class ring (e.g. the evaluation of a polynomial at the point with ) can take place as an evaluation in the whole numbers with a final modulo reduction; however, the intermediate results can already be subjected to a modular reduction at any (or all) points.

If the number is a power of two, the system of representatives symmetrized around zero is often chosen. This corresponds to a binary representation of the numbers in which the most significant bit is interpreted as a sign .

If a prime number , then the remainder class ring is a finite field , the remainder class field modulo , and is denoted by (from the English "field" for field). Inverse with respect to the multiplication can then be calculated unambiguously using the extended Euclidean algorithm .

Illustration on the face of the watch

The calculation with residual classes can be illustrated using the dial of an analog clock. The hours are numbered from 1 to 12, with hour 12 being considered hour 0.

If you start at hour 0 and add one hour each, you get each of the twelve hours on the dial in sequence. You add any two hours to each other by starting at the first given hour and counting down the second hour clockwise: To determine, you start at hour 4 and count five hours further, you end up at hour 9. If you now calculate , so count Five hours further from hour 9, you end up at hour 2, so it is in this system. How does this result come about? If you simply add the hourly values, you get 14; and “2 o'clock” corresponds to “2 o'clock” on the twelve-hour dial, so here it is . The result of an addition is therefore the normal sum, possibly minus a twelve. This corresponds to the remainder when dividing by 12. This type of addition is called “addition modulo 12”. You can see here that adding the twelve does not change a number for every hour . This explains why the 12th hour is referred to here as hour 0.

The multiplication is traced back to the addition: To determine, for example, one forms the sum and lands at the 12th hour. The product delivers "4:00 PM", and that is identical to "4:00 PM"; modulo 12 is .

The twelve hourly values, together with the rules for addition and multiplication, are written as .

The calculation of the minutes on the dial of an analog clock works accordingly. The minutes are numbered from 0 to 59 and accordingly you get in, for example , etc. Calculating with remaining classes can also be found in the calculation of days that are limited to 24 hours and in weeks that consist of 7 days and then accordingly not on one Set of numbers but of day names is defined, for example "5 days after Friday is Wednesday, 5 days before Wednesday is Friday".

If whole numbers are divided by 2 with a remainder, the remainder is either 0 or 1. This is the second smallest of all remainder class rings after the single-element zero ring. Since 2 is a prime number, there is even a finite field here , the smallest of all fields.

Division by 3 results in the three remainder classes

is a ring and, since 3 is a prime number , even a field , which is referred to as (from English field ).

Let's look at the remainder of dividing by 4.

In this remainder class ring , i. H. is a zero divisor . So the multiplication is not completed in. The resulting structure is therefore not a body, but only a commutative ring (the remainder class ring modulo 4), because zero divisors have no multiplicative inverse . This has to do with the fact that 4 is not a prime number and is therefore not an integrity ring . (However, since 4 = 2 2 is a power of a prime number, there is another field that has four elements.)

Common microprocessors (often referred to as the 16-bit integer numbers: how they are used for example in computers, expected in the integer arithmetic in reality in residue class rings short integer called) make up the remainder class ring with . For example, the result of the addition 65535 + 1 is 0, and 32768 · 2 is also 0.

The idea of ​​residual classes can also be implemented in rings other than whole numbers. To this end, the concept of the ideal is defined and residual classes are formed modulo an ideal, which in turn form a ring called the factor ring .