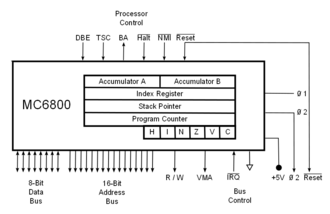 Like the Intel i8080, the MC6800 is a typical representative of the first generation of microprocessors. Like this, he had a significant influence on further developments. While the architecture of the i8080 is based on the i8008 and thus the Datapoint 2200 processor, the PDP-11 is the decisive influence on the MC6800 . Design features of the MC6800 are:

The "direct addressing", in which the first 256 bytes (addresses 00xx) could be addressed with shortened commands, contributed to the flexibility. While the 8080 had its own address space for input / output, this was mapped in the normal 16-bit address space on the MC6800. The 5 V power supply made it much easier to use than other processors (8080: three different voltages). This was achieved through an internal voltage doubler. The two-phase clock was generated externally (MC6875).

The MC6800 was only installed in a few home computers such as the SWTPC 6800 and the Altair 680 from MITS . In the first generation of electronic pinball machines from the manufacturers Bally and Williams , the 6800 can be found in all devices and was only replaced by the 6803 at Bally in 1985. It was also used in some commercial video games until the mid-1980s. The processor is built in LSI technology , has around 4,000 transistors and was normally delivered in a 40-pin DIP package. It is housing and signal compatible, but not software compatible with the MOS 6501 , which was replaced by the MOS 6502 following a patent infringement lawsuit in Motorola . This was built into the Apple II and many other home computers.

The MC6800 is the father of many processors, including the further developed M6809 , which could address indirectly indexed and was used in game consoles ( Vectrex ), in the Tandy TRS-80 Color Computer and Dragon 32 and in embedded applications. Other areas of application were the industrial area and special applications such as in the pharmacy computer area. The important operating system here was FLEX . 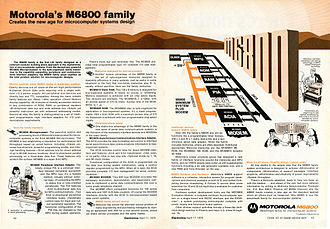 Advert for Motorola's M6800 family of microcomputers in Electronics International 1974.

The MC6800 came with a number of peripheral chips that were also used with non-Motorola processors: