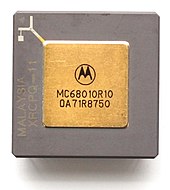 Compared to its predecessor - the 68000 - it offers a slightly expanded set of instructions , the concept of virtual memory management (which enables direct addressing of a larger address space) and consistently implements the possibility of operating a virtual machine. Instruction execution has also been accelerated by requiring fewer clock cycles for certain operations. In addition to three additional supervisor registers, the MC68010 can also be put into loop mode using an instruction cache, during which the processor only performs read / write operations on the operands. The performance increased by 5 to 10% compared to the pin-compatible MC68000 with the same clock rate.

Nevertheless, the MC68010 was used in relatively few computers (e.g. the HP 9000 model 310, the SUN 2/170). Owners of Amiga and Atari computers and other devices equipped with a 68000 processor occasionally used the 68010 to accelerate their system and to carry out special system extensions. The 68010 was manufactured in the housing types PGA , DIP and LCC, also by the companies Signetics and Toshiba until around 1995.