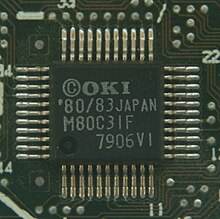 In simplified terms, 8 bits means that the processors are designed in such a way that 8  bits (i.e. 1  byte ) can be processed simultaneously or during one cycle ( word length ). Register and address bus are often 16 bits wide, the memory area is partially expanded by memory mapping .

8-bit processors are still used most frequently by all processors, but not as main processors in computers, but primarily in the form of embedded systems as microcontrollers . Indeed, a modern computer system contains a number of 8-bit processors, e.g. B. in the mouse and keyboard, on the motherboard and in the monitors. The majority of USB devices are also based on 8-bit processors.

8-bit processors have the following properties:

In contrast, the following changes are typical for 16-bit architectures, although not all of them have to be present:

as well as various other designs.

Processors from the MCS-51 series are produced by many different manufacturers in very many variations, but in terms of quantity they are significantly behind the PIC processors from Microchip and the Motorola 6800 derivatives such as the 68HC05 and 68HC08 from Freescale , both of which make up more than a quarter of the market.