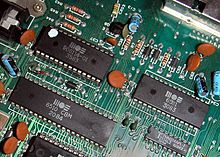 Part of a C64 board with some important chips from MOS Technology, u. a. SID and a 6510 CPU

MOS Technology, Inc. , MOS for short , later also known as the Commodore Semiconductor Group (CSG), was a manufacturer of microprocessors and electronic computer components, best known for its 6502 processor. It should not be confused with the Mostek company or the MOS semiconductor technology itself. MOS is an abbreviation and stands for " Metal Oxide Semiconductor ".

MOS was founded in 1969 as a subsidiary of the manufacturer of passive components, the Allen-Bradley Co., in the Valley Forge Industrial Park in Pennsylvania . The product range in the first half of the 1970s consisted of components manufactured in TTL and MOS technology for the booming pocket calculator market, such as the 100-bit shift register MTS1001, the 256-bit SRAM MCS2050, the character ROMs MOS2017 and MOS2020, the 90-key keyboard encoder array MCS1009 as well as the clock generator MTS2517, later the pocket calculator ICs MPS7529, MPS7530, MPS7541, MPS7542 and MPS7545 - in some cases second source products for Texas Instruments chips.

A decisive step for the company was the arrival of Bill Mensch , Chuck Peddle and six other former Motorola developers in 1974, who had developed the 6800 processor at their former employer on behalf of the Olivetti company . Dissatisfied with the pricing policy of their former employer and full of ideas for improving their design, they now planned to design a similar processor, but with a smaller chip area and therefore cheaper, by omitting unnecessary registers, but the processor should receive better addressing types. The result was the MCS6501 processor in NMOS technology , which was offered in 1975 for 20 US dollars (less than 1/10 of the price of the competing Intel processors at the time). Since it was pin-compatible with the 6800 processor, the company MOS was sued by Motorola and had to take the 6501 off the market.

The 6502, which was also offered for 25 US dollars, was not pin-compatible and, unlike the 6501, already had an integrated clock generator, it could still use the Motorola peripheral chips and was - also in different controller versions - a great success. Presented at the WESCON75 he was there a. a. discovered by Steve Wozniak and used by him in the Apple I and Apple II . It was also used by chip developer Chuck Peddle in the PET 2001 and later by Commodore in the VC20 , but also in Atari and many other home computers . In the summer of 1976, MOS presented the KIM-1 microcomputer system with the MCS6502 as the CPU.

In September 1976 the company, which had got into trouble due to the collapse of the calculator chip market and the lawsuit by Motorola, was bought up by Commodore - at that time its biggest customer for calculator ICs - and from then on co-produced under the name "Commodore Semiconductor Group" Headquarters in Norristown, Pennsylvania most of the chips for the Commodore products, although for practical reasons the imprint MOS was still used on the ICs. The company failed to further develop the successful 65XX processor line (which was, for example, due to William D. Mensch Jr. , who left the company before the takeover, in the Western Design Center , which he founded, with the 16- bit 65816 and the energy-saving 6502- CMOS version 65C02).

During the Commodore era, the company not only developed the various variants of the 6502 CPU (see Commodore 64 and C128 ), but also the associated peripheral chips (including the VIC , CIA and SID , which was designed by Bob Yannes ). For the Amiga model series, besides the modified CIA chips, the custom chips that made the Amiga hardware stand out were also manufactured.

Most recently, the company made local headlines in the late 1990s due to chemical residues at its Montgomery County, Pennsylvania site. The company site had been listed as a problem area by the Environmental Protection Agency (EPA) since 1989 because of groundwater pollution with trichlorethylene and other volatile organic compounds .

After the liquidation of Commodore in 1994, the CSG was sold to GMT Microelectronics Corporation . In the following years, this operated chip production at the former company location until 2001. In 2001, GMT was liquidated because of the groundwater pollution and the associated high costs.

Various companies built the 6502 processors under license, e. B. Rockwell International (R6500) and Synertek (SY6502) or Mitsubishi. In the Eastern Bloc , the Bulgarian manufacturer KMT - Prawez ( Комбинат по Микропроцесорна Техника Правец ) copied the chip without a license under the name CM630P, the chip was used in the Apple II clones of the Prawez 8 series. In Japan, Ricoh's 6502 (RP2A03) was cloned for Nintendo. BCD arithmetic was dispensed with in order to circumvent the licenses.

Articles on individual chips from the company: