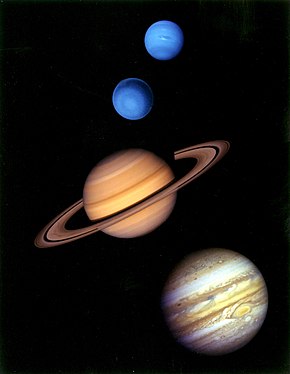 The four known giant planets of the solar system (from bottom to top): Jupiter , Saturn , Uranus and Neptune

Mass distribution of the giant planets among themselves

A gas planet or gas giant ("planetary gas giant") is a giant planet in astronomy , which mainly consists of light gases such as hydrogen and helium . In the past, four planets in the solar system were considered to be gas giants: Jupiter , Saturn , Uranus and Neptune . Since the 1990s, astronomers have increasingly applied the term gas giant only to Jupiter and Saturn, classifying Uranus and Neptune, which have a different composition, as ice giants .

Often gas planets are referred to as Jupiter-like or - from Latin  - Jovian planets .

Gas planets do not have a solid surface. The gas becomes denser with increasing depth as it is compressed by the layers above. Nevertheless, these planets can have a solid core - and according to the core aggregation hypothesis, such a core is even necessary for their formation. However, the majority of the planetary mass consists of light gases, which in the interior due to high pressure and low temperature in liquid or solid aggregate state are present.

The lack of a visible, solid surface makes it difficult to specify the radii or diameters of gas planets. Because of the continuously increasing density inwards, one can calculate the altitude at which the gas pressure is just as high as the air pressure that prevails on the earth's surface (at sea level 1  atm or 1013  mbar ). What you see when you look at Jupiter or Saturn are, without exception, the topmost cloud structures within their atmospheres.

All four giant planets in our solar system rotate relatively quickly. This causes wind structures to break up into east-west bands or strips. These bands are very noticeable on Jupiter, more subtle on Neptune and Saturn, but hardly detectable on Uranus.

The ribbons visible in the Jovian atmosphere are clockwise currents of matter. They are divided into zones and belts that orbit the planet parallel to the equator :

These structures are roughly comparable to high and low pressure cells in the terrestrial atmosphere, although they differ considerably from them. Unlike small local cells of pressure systems, the bands span along the latitude the whole planet (latitudinal). This seems to be due to the rapid rotation, which is much higher than that of the earth, and the underlying symmetry of the planet: after all, there are no land masses or mountains that could slow the fast winds.

But there are also smaller, local structures, such as spots of different sizes and colors. The most noticeable feature of Jupiter is the Great Red Spot , which has existed for at least 300 years. These structures represent huge storms. Thunderstorms occur at some of these spots : Astronomers have observed lightning bolts at a number of these “spots” . 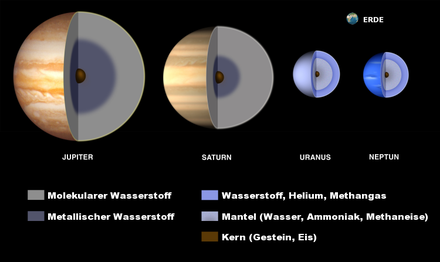 Schematic structure of Jupiter, Saturn, Uranus and Neptune (from left to right) compared with the size of the earth (above).

In the solar system , the planetary gas giants Jupiter and Saturn have a thick atmosphere , which consists mainly of hydrogen and helium , but also contains traces of other substances such as ammonia . Most of the hydrogen, however, is in liquid form, which also makes up the bulk of these planets. The deeper layers of liquid hydrogen are often under so much pressure that it acquires metallic properties. Metallic hydrogen is only stable under such extreme pressure. Calculations suggest that rocky material from the core is dissolved in the metallic hydrogen and therefore the core of larger gas planets does not have a solid surface either.

The ice giants in the solar system, Uranus and Neptune , only consist of a comparatively small proportion of hydrogen and helium, and for the most part of water ( ice ), ammonia and methane .

Two models with different approaches compete to explain the formation of gas planets.

In the model of disk instability, relatively smaller planetary nuclei arise than in the case of nuclear aggregation, which in the examples of Jupiter and Saturn have significantly less than ten Earth masses .

Many of the exoplanets that have been discovered near other stars in recent years also appear to be gas giants. However, these exoplanets often differ from the gas giants in our solar system. Above about 13 times the mass of Jupiter, which corresponds to 1.2% of the solar mass , the first nuclear fusion processes begin due to the great heat and the enormous pressure inside . These are essentially

Celestial bodies over 13 Jupiter masses (M J ) are not yet stars , but so-called brown dwarfs . Hydrogen-helium fusion does not yet take place in them, which does not start until about 75 masses of Jupiter and is the main energy source of a normal star . According to the more recent definition of brown dwarfs through fusion processes, the upper limit for a planet is 13 Jupiter masses. If a gas giant has a mass over 13 M J , the gas ball begins - in contrast to a planet - to release fusion energy and is called a brown dwarf up to around 70 M J (7% of the solar mass), but, unlike a star, it can start the contraction process. not yet stabilize by this energy. Only even more massive celestial bodies are actually stars.

There are also "stray planets" or objects of planetary mass that do not belong to any star system, lie below the mass of brown dwarfs and thus resemble gas planets. The Sub-Brown Dwarfs are a similar phenomenon, the difference being mainly due to the temperature and possibly the history of origin.