The clearly visible rings of Saturn 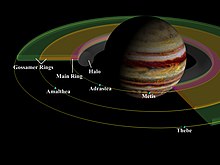 Scheme of the rings of Jupiter

Uranus rings in the infrared

A planetary ring is a collection of solid particles of different sizes (typically from the size of a dust particle to a diameter of more than ten meters) that orbit a planet-like celestial body or asteroid within a definable distance interval near a plane and are numerous enough to be described as a ring disk-shaped structure in their entirety be. Such rings can have different dimensions, compositions (for example made of ice or rock particles), surface and overall brightnesses. Several rings around a planet form a concentric ring system .

Another theory is that a planetary ring is created when the planet is hit by another celestial body or when two small bodies collide so that they break apart and, due to the planet's high gravity, do not reassemble but are distributed around the planet.

Planet rings in the solar system

In the solar system , each of the four gas planets has a ring system. Their particles orbit the planet in a straight line within or very close to its equatorial plane, and always mainly within the Roche limit. Despite the main common features, the structure of the rings is very different in all four cases.

The most famous planetary ring system are the rings of Saturn . It is the most extensive ring system, consists of light-colored material and is therefore already visible with a good amateur telescope. It consists of several so-called main rings, which in turn consist of many small rings.

Second most powerful after Saturn, the rings of Uranus are pronounced in the solar system . The ring system of Jupiter is the weakest . It consists of extremely dark material, and it is vanishingly inconspicuous, so that it could only be detected by space probes. It is believed that Jupiter's rings are being supplied with new material by tiny inner moons, while the old material is steadily trickling down onto Jupiter. Uranus and Neptune also have extremely dark rings. At Neptune, it was initially believed that his rings were only incomplete ring arcs, i.e. that they were not self-contained.

It appears that dense ring systems are only formed at a distance of 8 to 20 AU at a surface temperature of around 70 K from the sun .

In 2014, the European Southern Observatory (ESO) discovered rings around an asteroid for the first time, namely around (10199) Chariklo .

Since all gas giants in the solar system have ring systems, the existence of exoplanets with planetary rings can be assumed. While ice particles (as they form the main component of Saturn's rings ) can only be long-term in rings in planets outside the ice line, planetary rings made of rock fragments can be stable over the long term within the ice line. Such ring systems could be detected, for example, in planets observed using the transit method , if they are optically close enough to cause additional light fall off at the central star. No such observations are currently known (as of January 2015).

A sequence of eclipses of the star 1SWASP J140747.93-394542.6, which lasted 56 days in 2007, was interpreted in a publication in August 2011 as the transitory transition of the ring system of a (not directly observed) substellar object (exoplanet or brown dwarf) " J1407b " . In January 2015, this interpretation was confirmed and refined in a renewed analysis of the data. The announcement of this work by the University of Rochester was followed by press releases about the discovery of a Super-Saturn .

The ring system has a radius of about 90 million km (about 200 times that of Saturn's rings). The age of the star system, which is around 16 million years old, suggests that it is more of a structure analogous to a protoplanetary disk (or actually one if J1407b is too massive for a planet) than a long-term stable one Ring system in a fully developed planetary system .