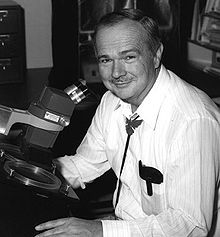 Eugene Shoemaker at the stereomicroscope to discover minor planets

Eugene Merle Shoemaker (born April 28, 1928 in Los Angeles , USA , † July 18, 1997 in Alice Springs , Australia ), also Gene Shoemaker , was an American geologist , impact researcher and astronomer . He became known as the co-discoverer and namesake of the comet Shoemaker-Levy 9 (with his wife Carolyn Shoemaker and David H. Levy ).

In 1950, at the age of 22, he accepted a position with the US Geological Survey , with which he remained lifelong.

In 1961 he founded the astrogeological research program of the United States Geological Survey and was also its first director. He was also involved in the lunar ranger missions and the training of American astronauts for the Apollo program . Shoemaker was even intended to be the first science astronaut for the Apollo program and was supposed to fly to the moon, but for health reasons it did not come to that and he subsequently trained the Apollo crews. In July 1969 he was chief scientist on the Apollo 11 mission that brought Neil Armstrong and Buzz Aldrin to the moon.

His career in astronomy began in 1973, when he at Palomar Observatory by asteroids began to search and comets that cross the orbit of the Earth. He was later helped by his wife Carolyn and David Levy. In addition to the discovery of the comet Shoemaker-Levy 9 , the group around Shoemaker was able to record around 30 other comets and around 800 asteroids, including numerous near-Earth asteroids . He was elected to the National Academy of Sciences in 1980 and the American Academy of Arts and Sciences in 1993 .

Eugene Shoemaker died on the afternoon of July 18, 1997 when his pickup collided head -on with an oncoming vehicle. Shoemaker was traveling with his wife on Tanami Road in the Tanami Desert about 650 km northwest of Alice Springs. On the gravel road, he avoided the oncoming vehicle to the right, ignoring the left-hand traffic in Australia. His wife survived injured, and four other inmates were uninjured.

A few grams of its ashes were brought to the moon by the Lunar Prospector spacecraft . A capsule the size of a lipstick served as a container, in which a verse from William Shakespeare's " Romeo and Juliet " was engraved. He was the first and so far the only one to receive this.

In recognition of his contributions to impact research, the impact crater near Wiluna, originally known as the “Teague Ring”, was renamed “ Shoemaker Crater ”. A lunar crater and (2074) Shoemaker , an asteroid of the inner main belt , are named after Shoemaker.