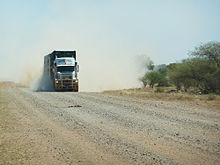 The Tanami Road , also Tanami Track or McGuire Track , is a trunk road in the Australian Northern Territory and northern Western Australia . It connects the Stuart Highway near Bond Springs north of Alice Springs with the Great Northern Highway southwest of Halls Creek .

At Bond Springs, Tanami Road branches off the Stuart Highway (N87) to the west. It runs first to the west-northwest along the northern edge of the western MacDonnell Ranges and then crosses the Tanami Desert , from which it got its name, to the northwest. At Mount Tanami , 80 km before reaching the border to Western Australia, the track turns west.

In the Northern Territory, the route runs partly through land that now belongs to the Warlpiri Aboriginal tribe . A transit permit ("Permit") is not required. The only interruptions on the otherwise monotonous route are the petrol stations at Tilmouth Roadhouse and in Yuendumu .

After crossing the border, Tanami Road leads north of the Lewis Range another 158 km to the west and then turns north of the salt lake Lake Gregory to the north.

At this point, near Billiluna, the road meets the Canning Stock Route , one of the most famous and toughest outback slopes , and accompanies it to its end. About 120 km before its end in the Kimberley region, the Tanami Road passes the Wolfe Creek Meteorite Crater east of the road in the national park of the same name. 16 km southwest of Halls Creek it meets the Great Northern Highway (N1).

At 1,014 km, Tanami Road is the shortest connection between Alice Springs in central Australia and the Kimberley region .

Cattle used to be herded on this track from the region around the MacDonnell Ranges in central Australia to Halls Creek in the Kimberley region. Nowadays the road is mainly used by the road trains of the Newmont Mining company . This operates the The Granites Mine, about 550 km northwest of Alice Springs.

The first 160 km from the junction of the Stuart Highway to almost the Tilmouth Well Roadhouse are paved and two lanes, then the road turns into a gravel road.

Petrol stations are at Tilmouth Well Roadhouse (km 166) and Yuendumu (km 268) in the Northern Territory, and in Billiluna (km 860) in Western Australia.