This article describes the location in Australia. For the photographer with the pseudonym of the same name, see June Newton 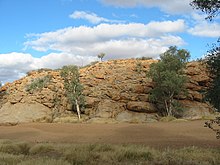 Reference of the "source"

Alice Springs ( Aranda : Mparntwe ) is the only major city near the geographic center of Australia and in this capacity the infrastructural gateway to the Australian outback , approximately 1,300 kilometers from the nearest major cities ( Adelaide , Darwin ). It is located in the Northern Territory and has about 24,000 inhabitants.

Alice Springs was created in 1872 as part of the construction of the Trans-Australian Telegraph Line . Communication scientist and astronomer Charles Todd was responsible for this project as director of postal services on behalf of the colonial government of South Australia . Since the telegraph connections could only bridge a limited distance due to the electrical resistance of the lines, a number of telegraph stations had to be built in the middle of the outback. Alice Springs was one of them.

William Whitfield Mills, who was in the service of this project as a surveyor, had the task of selecting suitable terrain for this telegraph station. He found a large pond on the edge of the MacDonnell Ranges which he mistakenly believed to be a spring; in honor of his boss's wife, Alice Todd, he named the waterhole Alice Springs . It is part of a river bed that only carries water after heavy rains, but which lasts longer at this point. The telegraph station , now a museum, was built here and was named after the waterhole.

The settlement from which today's Alice Springs grew was four kilometers south of the telegraph station and was called Stuart (Town) - in honor of the explorer John McDouall Stuart , who in 1862 was the first to make his way through the Red Center to the north coast. However, due to the lack of infrastructure, the small town hardly attracted any settlers. The population did not multiply until the Great Northern Railway reached the settlement in 1929. In 1933 the telegraph station was moved to Stuart and the place was renamed Alice Springs. The Red Center's economic base was extensive cattle grazing, camel farms and mining. The development of tourism from around 1970 until today opened up new perspectives for the city in the hotel and restaurant industry, retail and art trade.

Station with " The Ghan "

Since Alice Springs is in the outback, supplies were initially only possible by camel caravans . Trucks were added from around 1920 . The narrow-gauge railway to Port Augusta , which had existed since 1929, was replaced in 1980 by the first construction phase of the standard-gauge Central Australian Railway , which branches off from the Trans - Australian Railway in Tarcoola . The second construction phase to the north followed in 2004, connecting Alice Springs with Darwin .

The airport is important for tourism, as Alice Springs is the starting point for trips to the Ulu -u-Kata-Tju Nationalparka National Park with the most popular destinations of the Red Center Uluṟu ("Ayers Rock") and Kata Tjuṯa ("Olgas"), the Kings Canyon and to other attractions in the wider area.

Alice Springs sees itself as an urban center with a well-developed tourist infrastructure. Charles Todd is omnipresent as the eponymous personality; the mostly dried up river bed, the main shopping street and some restaurants and shops are named after him.

For the tourists who take their strategic starting point for excursions to the Red Center, the Todd Mall conveys outback and Aboriginal flair through outdoor facilities with red sand, boulders and tamarisks , typical components of the name of the cafes, bars, restaurants, shops and art galleries ( bush , dreamtime , aboriginal , outback ), decors in orange-brown Aboriginal colors and the corresponding offer (sportswear and equipment for individual travelers, souvenirs and handicrafts, everyday objects and didgeridoos of the Aborigines ). In some galleries, signed paintings and sculptures by identified Aboriginal artists are also available, which are to be distinguished from the handicrafts made in the reservations.

In 2001, Aboriginal people made up 18% of the city's total population. 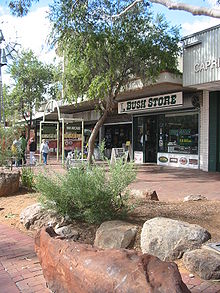 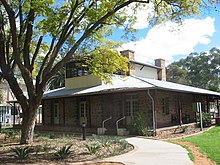 Outside the city center

Every year on the third Saturday in August the Henley-on-Todd-Regatta takes place, a not very serious "boat race" in which boat-like constructions are carried through the dry, sandy riverbed of the Todd River.

There is an Echelon eavesdropping post in Pine Gap near Alice Springs .

15 km south of the city is the Red Center's only winery , founded in 1969 by a couple of pharmacists. With the help of artificial irrigation methods, four grape varieties are grown ( Riesling , Cabernet , Shiraz and Sémillon ). The restaurant and tasting room are attached.

Well-known geologist and astronomer Eugene Shoemaker died on July 18, 1997 in a car accident near Alice Springs.

In its travel information about Australia, the Federal Foreign Office expressly points out the increased crime in Alice Springs, especially at night.