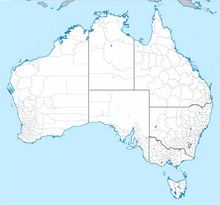 Subdivision of Australia into LGA

The LGA concept was introduced during the colonial rule in the 19th century. The formation or dissolution of the LGA and the determination of its competencies is the responsibility of the governments of the respective states and territories. Large, uninhabited parts of the country are not divided into LGA. The Australian Capital Territory and the Jervis Bay Territory are also not subdivided into LGA .

An LGA is led by an elected assembly, the so-called council , presided over by a mayor or president . In some areas the mayor is directly elected by the population, but usually by the members of the council. The council's area of ​​responsibility is limited to municipal tasks such as the administration of public facilities (libraries, museums, parks, etc.), the establishment of land use plans and waste disposal.

The name of an LGA is often derived from the name of the area and appended to it a designation such as Borough , City , District , Municipality , Region , Rural City , Shire or Town . Numerous LGAs in New South Wales and some in South Australia also have the addition of Council , such as B. Manly Council or Waverley Council . This has to do with the fact that in some regional variants of Australian English the term Council is synonymous with geographic area, while in other areas the term is used solely for the elected local councilors.

There are different additions to names depending on the member state: