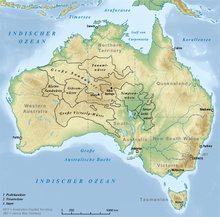 The Tanami Desert got its name from the British explorer and prospector Allan Davidson . The name Tanami was originally the name of the Aborigines for two rock caves in which drinking water had collected and which the second expedition under Davidson discovered on November 9, 1900. This name, which means never died in the language of the Aborigines , was later adopted by Davidson for the desert.

Davidson traveled on behalf of a British syndicate in November 1897 by rail from Adelaide to Oodnadatta and on to Alice Springs on horseback . There he put together his first expedition, which was on the way for two years. He was to examine an area in the Northern Territory of approximately 28,490 km² for mineral resources. On his return to Adelaide he was summoned by the Syndicate to report to London and given a second expedition. He was commissioned to discover gold deposits in the investigated area that could be economically exploited. This expedition lasted about a year, but Davidson failed to discover the deposits he wanted.

As in all Australian deserts, there is sporadic rainfall in the Tanami Desert, which allows for sparse vegetation. The desert is semi-arid and subject to monsoonal influence. 75–80% of precipitation falls in the summer months, most of it in the north. To the place Tennant Creek falls annually 375 mm.

Quaternary red sands overlay the Wiso Basin in the west and the Georgina Basin in the east of the desert. The Wiso Basin consists of sedimentary and volcanic rocks , while the Georgina Basin consists of sediments. To the west is a granite-tanami block made of granite , sedimentary and mafic volcanic rocks. This geological province is interrupted by sand plains and low ridges.

The Tanami Track , which runs through the desert

Except for a quarter of the area, the area is too hot and dry to farm. The agricultural areas are owned by the Aborigines . Tennant Creek and Wauchope are in the Tanami Desert, as are some small Aboriginal settlements. The area is inhabited by Aborigines of the Kukatja and Warlpiri , the latter staying in the south of the desert.

In 1996 field research revealed 1073 plant species in the Tanami. Most of the areas of the desert are covered by spinfex or hummock grasslands . Spinifex grasses and sometimes low shrubbery grow on the sandy areas, and trees also grow on the river banks.

In the same year 394 vertebrate species were counted, including 18 rare and endangered bird and mammal species. The Lake Surprise in the Northern Territory and the Lake Gregory in Western Australia provide refuges for numerous waterfowl. Various small to medium-sized mammals occur in the Tanami, including the black-tailed pouch marten ( Dasyurus geoffroii ), golden bandicoot ( Isoodon auratus ), brush- tailed rat kangaroo ( Bettongia penicillata ) and the thick-tailed rat species Zyzomys pedunculatus . Presumably there is also the Great bilby ( Macrotis lagotis ), the possum ( Trichosurus vupecula ) and the black paws rock wallaby ( Petrogale lateralis ). The night parakeet ( Pezoporus occidentalis ) is believed to be extinct . The Alexandras Parakeet ( Polytelis alexandrae ) is extremely rare. In addition to rabbits and cats, dromedaries damage the ecosystem. Termites colonize parts of the desert area.

Gold deposits located in the Tanami geological region were discovered in 1900. The Tanami and The Granites Mines exploit these deposits.