The fox kusu ( Trichosurus vulpecula ) is a species of marsupial that lives mainly on trees , is widespread in Australia and was introduced to New Zealand by humans .

The fox kusu is around 35 to 55 cm tall and has a 25 to 40 cm long tail. The male weighs up to 4.5 kg, the females only 1.5–3.5 kg. Due to the large distribution area, the coloration is variable. Most of the specimens are gray and the distal portion of the bushy tail is black. The underside of the last third of the tail is hairless and can be used for grasping. The fox kusus in southern Tasmania and the animals introduced into New Zealand have longer, thicker fur. Among them there are often specimens with very dark, almost black fur. The fox kusu can easily be distinguished from all other kusu types by its large ears. 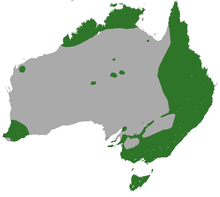 The distribution area in Australia

There are five subspecies.

Originally, larger areas of the arid center of Australia also belonged to the habitat of the fox kus. The taxonomic position of these now extinct populations is still unknown. The small subspecies T. v. arnhemensis was also viewed as a separate species in the past. However, both morphological and molecular biological investigations speak in favor of classifying the animals as a subspecies of the Fuchskusu. The Queensland kusu ( Trichosurus johnstonii ), on the other hand, which used to be a subspecies of the fox kusus, is now an independent species. It occurs sympatric with the fox kusu and both morphological and molecular biological studies indicate that it is better in shape than independent Kind of lead. The fox cus found in New Zealand today are descended from specimens introduced by humans from Tasmania, Victoria and New South Wales.

The fox kusu occurs in a variety of habitats from rainforest to open woodland, but appears to prefer relatively dry eucalyptus and other forests. It is one of the few species of marsupial that also thrives on the outskirts and in parks and other urban green areas. The fox kusu is nocturnal . During the day, the kusu sleeps in a nest in a tree hollow , between fallen tree trunks or rocks, in a hollowed-out termite den or in another suitable place, such as rabbit burrows, sheds, and ceiling spaces in buildings that are not reliably closed. The animals wake up about 1 to 2 hours before sunset and leave their nest about half an hour after sunset. They stay in the nest in heavy rain. Although they are mainly tree-dwellers and do not occur in treeless areas, they are also regularly found on the ground. During a study in southeast Queensland, the animals spent 91% of their active time in trees and 9% on the ground. The main activity time of the fox kusu is between 11 p.m. and 2:30 a.m. The habitat of a male covers an average of 5.4 ha, that of a female is significantly smaller at 2.4 ha. Correspondingly, males cover a greater distance (on average 394 m) than females (on average 261 m) in one night. In Australia, 0.2 to 4 specimens live on an area of ​​one hectare, in New Zealand up to 25 individuals have been counted in stone beech forests on an area of ​​one hectare. The territories of the animals overlap over a large area. The animals make hissing and coughing guttural sounds to communicate . They also secrete secretions from glands on the chin, chest and cloaca. During the breeding season, the acoustic communication between the animals becomes significantly stronger. Predators that pursue the Fox Kusu are diamond pythons , monitor lizards , dingoes , red foxes and feral domestic cats.,

The fox kusu mainly eats leaves, but supplements its diet with fruits, flowers, buds, invertebrates and other things. In the human neighborhood they prove to be inventive food procurers with a penchant for fruit trees, vegetable gardens and raids in kitchens. The proportion of eucalyptus leaves in the diet varies from less than 10% to over 95%, depending on the availability of other plant species. Acacia leaves, various grasses, herbs and fern leaves are also eaten. In Tasmania southern beech , Phebalium and Pomaderris the main food source for the animals.

Most young animals are born in autumn (March to May), a second, less important reproductive period is in spring (September to November). In tropical and arid regions, however, the animals can reproduce all year round, depending on the food supply. 90% of the females get a single young animal after a gestation period of 16 to 18 days. These remain in the bag for 4 to 5 months and are then carried on the back by the female for 1 to 2 months until weaning. Females become sexually mature at 12 months of age. Most Fox Cusus die before they reach the age of eleven. The maximum age is 13 years.

Kusufels were very popular around 1900 under the name "Australian Opossum". For example, Australia exported 4 million skins in 1906. European settlers introduced more than 600 kusus to New Zealand for fur production between 1858 and 1920 . The so-called New Zealand opossum fur or the wool of the animals resulting from the hunting measures are still used, depending on the market situation.

Today in New Zealand there are around 70 million of the “possum” known there because of the lack of natural predators. The alien species is ecologically undesirable. Broad-leaved trees such as rata are particularly endangered by the possums ; the animals damage the treetops and possibly supplement their diet with young birds. They have little impact on the southern beech ( Nothofagus ), but their presence reduces the biodiversity of the southern beech forest as they decimate many of the other species found here.

Attempts to eradicate them, or at least reduce their numbers, have been trapped and poisoned, but have been slow to achieve success. Private individuals were called on to take part in the fight against the pest. For example, the Department of Conservation recommended wide metal bands on trees to prevent climbing. Electricity pylons are generally equipped with these tapes. Live traps are only recommended if one is willing to subsequently kill the animal.

The poisons used, mostly sodium fluoracetate , called "1080" in New Zealand, or sodium cyanide are themselves harmful to the environment. In order to prevent damage to young trees, one wants to keep the number of individuals very low, perhaps to 5 percent of the number existing without intervention. Field trials with bait containing cholecalciferol as an alternative to sodium fluoracetate were successfully carried out.

The fox kusu is seen as a major ecological threat in New Zealand, and environmental organizations are calling for it to be eradicated. The damage adds up to that of other introduced species such as red deer and domestic goats, as well as human activity such as agriculture, forestry and mining. Therefore, possums are included in the IUCN ISSG's list of the 100 most dangerous neobiota .