There are several hundred Aboriginal tribes in Australia . The number of tribes before the British colonized Australia, i.e. before 1788, is estimated to be over 200 to 700, depending on the source.

Aborigines generally speak of their people and their land ; in eastern Australia some tribes also refer to themselves as nation . A dialect is spoken in their ethnographic areas, some of which are the size of an average European country. In scientific discourse, groups that speak the same dialect, tribes or bands, are referred to as being closest to the translation into stem. A map of the tribes was first published by Norman Tindale in 1940 and revised in 1974.

Nicolas Peterson has divided the Australian tribes into 17 different cultural areas of the Aborigines according to their respective cultural characteristics .

Within a country, people lived in their clans that were extended families with different kinship systems . Contacts between the clans as well as between peoples were common, but there were strict protocols for these encounters.

It is generally known that the Aborigines lived as hunters and gatherers nomadically in the interior and along the coasts of Australia.

What is less well known is that the Gunditjmara , for example, had a sophisticated system of aquaculture and eel breeding and that they built stone dwellings. They built an aquaculture using stone dams to hold back the water in the swamps, where they raised eels and other fish. They directed the water over weirs and caught fish in traps .

It is also little known that the extinct Ngaro tribe lived on islands in the sea area of ​​the Whitsunday Islands and were the only seafaring Aboriginal tribe in Australia to nomad from island to island using outrigger canoes . In doing so, they developed skills to navigate safely at sea. 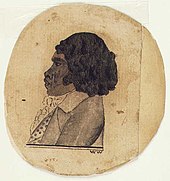 Portrait of Bennelong , of the Eora people , who had been given a brick hut at Bennelong Point, where the Sydney Opera House now stands. Bennelong traveled to England after 1792. 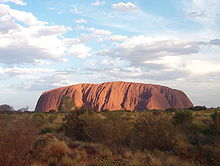 The Pitjantjatjara or Anangu live in the vicinity of Uluṟu. 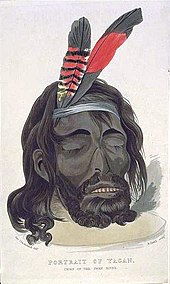 Portrait of Yagan , the Noongar "Chief of Swan River "