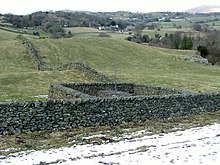 Land Art (also common in German) is an art movement of the fine arts that originated in the USA at the end of the 1960s and was first referred to as “Earth Works” in 1968 as part of an exhibition in the Virginia Dwan Gallery in New York . The term "Land Art", which is particularly popular in Germany, was coined in 1969 by the German filmmaker and television gallery owner Gerry Schum in his first television exhibition Land Art (broadcast on April 15, 1969 in the SFB ).

Land Art was - together with minimalism - one of the most radical artistic concepts of the time and is still present - also in architecture and landscape architecture - an important source of inspiration. At the end of the 1960s, however, the artists themselves strictly rejected any classification and often worked in parallel in several artistic directions.

Land Art is the transformation of geographical space into a work of art , often an architectural space . Land Art does not focus on a certain size or method, but works with rooms on the smallest scale up to entire stretches of land and with found natural materials or massive interventions with heavy construction equipment and concrete.

Land Art originated in the USA in the 1960s. In contrast to Minimalism, which was concerned with objectivity and was mainly to be found in the context of galleries and museums, Land Art was characterized by a romantic, but also by an explicitly socially critical component. The bourgeoisie, who viewed the works of fine arts only as objects of speculation, did not want to deliver new consumer goods, but rather to create works that could not be exhibited in any gallery, i.e. were neither transportable, for sale nor permanent. The works of art were not placed in the landscape like objects that simply use the landscape as an attractive background, but became the landscape themselves. The first works were created from 1965 by Alan Sonfist in New York and by Douglas Leichter and Richard Saba in Maine .

At the same time, however, there were also projects to build large-scale facilities in a permanent manner; these often last for decades. James Turrell has been building his clearing crater in Arizona since 1974 , and Charles Ross has been building his Star Axis in New Mexico since 1971 . Nancy Holt created Sun Tunnels in Utah . All three projects incorporate landscape, man-made structures and the sun into the work.

The radical approach in the work “Double Negative” by Michael Heizer , one of the young pioneers of this art trend, from 1969 is particularly impressively documented : Bulldozers and dynamite were used to make two 9 meter wide and 15 meter deep precisely linear incisions with a total length of more Drifted 450 meters into the erosion edge of the desert-like Mormon Mesa plateau near Las Vegas . 240,000 tons of rock had to be moved in order to create an enormous space, a tangible "negative" sculpture that you should not only look at from the outside as usual, but that you should walk through and experience as a meditative space.

With the intentions of the later burgeoning ecological movement , the Land Art artists had absolutely nothing in mind. "It's about art, not about landscape." Michael Heizer emphasized expressly and thus resisted all attempts to interpret Land Art as ecological landscape art. It was not until the European natural art, which emerged at the beginning of the seventies with increasing environmental awareness, that it was strongly oriented towards basic ecological ideas. Many artistic interventions, which are now generally referred to as "Land Art", differ fundamentally from the original approaches of American avant-garde art of the 1960s and can more appropriately be described as "Natural Art" or "Environmental Art". In contrast to Land Art, for example, the social and art-critical component is no longer the focus of interest, and the majority of nature artists are less concerned with provocative, radical gestures in the landscape than with sensitive, often decorative setting of ephemeral objects into the nature.

Today the term "Land Art" is used in a very generalized way and often for reasons of advertising strategy to any kind of natural art or art in the landscape, although from an art theoretical point of view no conceptual relationship to the original Land Art of the 1960s (see above) given is. Nature (deserts, fields or bodies of water) was originally used as a medium for artistic design and not as a decorative background. The documentation was often made because of the large extent of the works of art and the desired effect through aerial photography , but is not, as is often misunderstood, inevitably part of the work, on the contrary: At the beginning the Land Art artists did not allow any photographic or film documentation about the To prevent marketing. There were certainly also small Land Art works of art, for example “Matchdrop” by Michael Heizer. The dimensions were not always decisive, only the landscape and the minimalist conception were important.

In today's natural art, the influence of nature on the works of art is also important. The weather and growth of the materials used often change the work of art. This creates dynamism and processuality. Therefore, the documentation, especially the photographic one, is important, since very few viewers can follow these sometimes protracted developments.