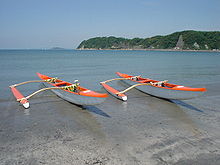 An outrigger canoe ( outrigger boat ) is a canoe which, due to its construction, can only be moved safely on the water with an outrigger or float connected to the canoe with mostly two (often wooden) cross struts ( Iato or Iako ) .

The history of the outrigger canoe began about five thousand years ago in the South China Sea . From there, the settlement of over ten thousand islands in the southern Pacific Ocean began . The boom made the natural relatively narrow dugout canoes tip-resistant and has been maintained in subsequent canoe types with planks because so that the hull could be constructed so narrow that easily considerable speeds could be achieved with high stability.

About two thousand years ago it was the Polynesians who covered greater distances over the open sea with improved boats and thus conquered the most distant corners, until they last discovered New Zealand about a thousand years ago . The 9000 year old Aboriginal tribe of the Ngaro in Queensland , Australia , which died out during the time of British colonization , also used outrigger canoes to sail the waters of the Whitsunday Islands . The outrigger canoe was the basis for colonizing the entire South Pacific. The Polynesian designers not only developed the simple but ocean-going type of boat, but also an excellent ability to navigate with the help of the stars and literally smell islands in their vicinity or to locate them by changing the wave formations. Today fewer and fewer people still master these ancient navigation skills.

In Sri Lanka , this type of boat (under the name Oruwa ) is still used today by coastal and lagoon fishermen. 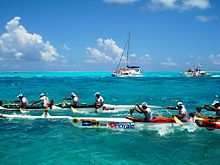 This type of boat has also been used as a utility vehicle in the South Seas until now , although it is often equipped with outboard motors. However, the tradition of paddling with an outrigger canoe is very much upheld on many islands.

The modern outrigger canoeing sport developed in French Polynesia (here they are called Va'a) and Hawaii, where the Outrigger Canoe and Surfboard Club , which still exists today, was founded in 1908 . On the occasion of the traditional Heiva cultural festival, lagoon races were held in Tahiti and the neighboring Society Islands as early as the early 19th century . From there, the sport spread in its present form, across many Polynesian and Melanesian (especially Fiji and New Caledonia) islands, to America, Australia and Asia and finally Europe.

In French Polynesia , the Va'a or pirogue sport, as it is called in French-speaking countries, can be compared in terms of importance with football in Germany .

There, as well as in Australia on Hamilton Island (Queensland) and Hawaii , large international outrigger canoe regattas take place between some islands. The Hawaiki Nui Va'a race and the Molokai Hoe race are among the most famous outrigger canoe regattas in the world. The Hawaiki Nui Va'a in French Polynesia , which connects the islands of Huahine , Tahaa and Bora Bora (three stages with a race distance of almost 130 km) is considered the toughest but also the most beautiful race of its kind. 1,200 international athletes compete there. No less famous is the Molokaʻi Hoe, which connects the Hawaiian island of Molokaʻi with Oʻahu . With around 1,000 participants and a race distance of over 40 miles, this race has been taking place for over 50 years. With a few exceptions, the outrigger canoes used for such regattas are no longer made of wood (such as that of the Hawaiian koa acacia ), but of modern composite plastics.

1 and 2 are available with or without a control system. Furthermore, the 1 and 2 seats differ in their seating: either in the boat or on the boat (also called sit on tops ). In the Polynesian area, 1-seater without steering system and with a seat device in the boat are predominantly used. In the USA (especially in Hawaii), on the other hand, 1 and 2 units with a control system and sit-on-top device are predominantly used.

After boats were introduced to Asia, East Africa, Australia, North and South America a long time ago, the sport has also become more popular in Europe since the beginning of the 21st century.

In 1978 an outrigger canoe was used for the first time in Europe, it crossed the English Channel with a US team to celebrate the 200th anniversary of the discovery of Hawaii by James Cook. In 1994 a selection of German canoeists took part in the Hawaiki Nui regatta for the first time, and some of these paddlers founded the first German outrigger canoe club (1.OCC) in 2004. In 1999 the outrigger canoe club Ruahatu Va'a in southern France organized the first porquerollaise based on the Molokai Hoe. In 2000 a total of 4 teams took part in this race - the German team Oro Nui Va'a was the first foreign team to start there. In 2007 a total of 24 international teams took part in this race, which is now one of the most important 6-series races in Europe.

In 2001 the Orofero Challenge was organized for the first time (also in the south of France) , a race based on the model of the Hawaiki Nui Va'a. The first open European Championship (Europa Cup) was held in Northern France ( Saint-Valery-sur-Somme ) in October 2003 . In 2007 the Unterweser Canoe Club from Bremerhaven managed to paddle an outrigger canoe from the mainland to Heligoland for the first time .

There are now around 30 clubs in Europe that practice this sport, most commonly in Italy and France, but also in England, Sweden, Belgium and Holland. In Germany, too, the number of outrigger canoe athletes is increasing, as is the number of clubs that offer outrigger canoes. The German Canoe Association (DKV) and some regional canoe associations have already taken up this discipline or provide contact persons. In 2008 there was a German Cup supported by DKV for the first time on the Baltic Sea off Rerik .

At the international level, the International Va'a Federation (IVF) unites the vast majority of countries in which the outrigger canoeing sport is practiced (especially Tahiti, Hawaii, USA, Canada, Australia, New Zealand, Samoa, Italy, England , France and Germany) with the primary goals of organizing outrigger canoe world championships and promoting Va'a sport. The IVF was founded over 25 years ago and hosts the Sprint World Championship every two years. In August 2008, Germany took part in this championship for the first time with a team. Germany is represented on the IVF Board of Officers and provides a contact person for the European outrigger canoe sport.

The International Canoe Federation (ICF) has also added outrigger canoeing to its portfolio, but has not yet organized any championships.