Geelong [ dʒɪˈlɒŋ ] is a port city with around 160,000 inhabitants in the Australian state of Victoria . It is the second largest city in the state and the center of the City of Greater Geelong administrative region .

Geelong is located at the western end of Port Phillip Bay , which is called Corio Bay in this part , around 75 kilometers southwest of Melbourne . The city center lies between the bay and the Barwon River . A small hill blocks the river's way into Port Phillip Bay, which is why it flows into Bass Strait southeast of the city . It is around 20 kilometers from the city to the open sea. To the east of Geelong is the Bellarine Peninsula . The famous Great Ocean Road begins a little south with various seaside resorts and attractions such as the Twelve Apostles . Geelong is a regional center of a rural region. 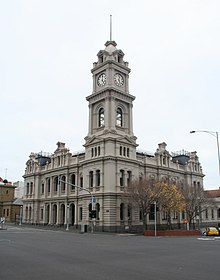 The name of the city comes from the word Jillong , which the Aborigines used to refer to the bay.

Before the 1830s, only a few Europeans explored the area. On February 1, 1802, a British boat was for the first time in Port Phillip Bay. In March 1836 the first settlers settled in the Geelong area. In 1838 there were already 545 people in Geelong. At that time, the place had a church, a hotel, a shop and a wool store. Geelong wool has been exported to England since 1841 . At the time a steamboat ran regularly to Melbourne and a newspaper was published.

When gold was found in Ballarat , Geelong also benefited from the gold rush 90 kilometers northwest and grew to a size similar to Melbourne. When the gold rush was over, wool became the city's main source of income. From the 1920s onwards, various industrial companies settled on site. 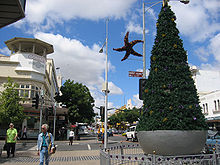 Christmas decoration in the city center

The most important local employers include a refinery , an aluminum plant and a former Ford car factory , which ceased production in 2016. In the seaside town of Torquay are surfing equipment and clothing produced. The area lives largely from agriculture and on the coast from tourism .

Melbourne can be reached in about an hour via the Princes Highway . Avalon Airport is less than 20 kilometers northeast of the city . The airport has only been used for passenger flights since 2004, especially by low-cost airlines . The freight port of Geelong is connected to the hinterland in south-west Victoria via several railway lines.

Geelong is the location of Deakin University .

The main attractions in the city are the Botanical Gardens and the National Wool Museum . The museum , housed in an old wool store, explains the importance of wool in the history of the city. Geelong is also the starting point for the coast and beaches in western Victoria.

The Geelong College Prep Newtown has the elementary school in Sama Lio ( Loi-Huno ) in the municipality of Viqueque a partner school.

In February 2006, Geelong hosted the "Rescue", the world championship in life swimming, which is held every two years by the International Lifesaving Federation (ILS).