The Tasmanians were almost completely exterminated by the colonial era, and the Tasmanian languages ​​became extinct before any significant record of them could be made. Tasmania's population has been cut off from the mainland since the last Ice Age and apparently for 10,000 years without any contact with the rest of the world. Too little is known to clearly classify their languages, but it appears that they have some phonological similarities to mainland languages.

It is debatable how many languages ​​were spoken in Australia before the arrival of Europeans. The numbers fluctuate between 200 and 300. However, they usually agree on 250. There are two main reasons for the fluctuating figures:

According to RMW Dixon's 2002 standard work, there were 250 individual languages ​​in Australia at the time of the arrival of the Europeans. Half of them are now extinct. Only 20 languages ​​are still actively passed on to children today. This is largely the result of the language policies of previous Australian governments, which sought to eradicate Aboriginal culture and languages, resulting in punitive measures, forced relocation or sterilization. From 1900 to 1972 at least 35,000 children, the “ Stolen Generation ”, were torn from their families and taken to homes of church or other charitable organizations.

The remaining 100 or so languages ​​only have middle-aged or elderly speakers, so that more of these languages ​​will continue to disappear. The 2001 study by McConvell, Patrick & Nicholas Thierberger concludes that - if development continues - all Australian languages ​​will be extinct by 2050. They suggest that only two or three of the strong languages ​​- Warlpiri , Pitjantjatjara , Arrernte  , for example - may survive a generation or two longer.

Since the 1970s, some language centers have been set up that play an important role in the preservation and in some cases even revitalization of Australian languages, such as the Kimberley Language Resource Center in Halls Creek ( Western Australia ).

Origin and subdivision of the Australian languages 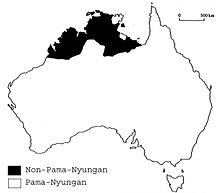 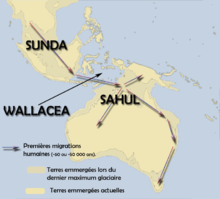 Paths of the first human migrations across the Sunda and Sahul . Around 60,000 to 50,000 years BC Chr. Gray-yellow areas that were above sea ​​level during the last glacial period .

From a linguistic point of view, the Australian languages ​​can be divided into two groups. Arthur Capell (1956) differentiates between languages ​​with only suffixes and languages ​​with suffixes and prefixes . The latter are spoken in northern Australia between the Kimberleys in the west and the Gulf of Carpentaria in the east. The first group covers the entire rest of the continent.

O'Grady, Wurm, and Hale in 1966 suggested that the suffix group represents a closely related family of languages extending over seven eighths of the continent and after the words for "human" in the two most remote areas of that language family in northeast Queensland and in the southwest of Western Australia "Pama-Nyunga" should be called. The other group - with prefixes and suffixes - is appropriately referred to as "Non-Pama-Nyunga". It does not form a single language family, but was initially divided into 28 and later into 26 language families.

However, the classification is controversial. According to Dixon in 1980, 1990 and 2002, the languages ​​of the Pama Nyunga group form a linguistic federation , i.e. a group of languages ​​that have had very long and very intensive contact and that have influenced each other. However, the latter has not yet been reliably proven. Dixon's theory is based on a slow convergence between neighboring languages, which eventually levels off at around fifty percent the same vocabulary. However, this model result cannot be found anywhere on the continent.

According to O'Grady, Wurm and Hale in 1966, the original language , Proto-Australian, first spread to the north of the continent, from where a group then moved further south and spread there steadily over the centuries. This group spoke a Proto-Pama-Nyunga, from which the many closely related languages ​​in the south developed. The Non-Pama-Nyunga in the north, on the other hand, are closer to the original Australian language. The Pama Nyunga languages ​​then developed and changed.

Dixon, on the other hand, believes that the languages ​​only changed individually and selectively after the entire continent was settled. These changes were then taken over into the surrounding languages ​​through contact and multilingualism. The most radical change took place in the north, where languages ​​have “introduced” or “invented” prefixes. According to Dixon, the Pama Nyunga languages ​​are not a family of languages, but simply have similar properties in terms of their structure and vocabulary. However, Dixon cannot explain why the languages ​​in the north show so much more diversity than the languages ​​in the south (language diversity). Both positions are represented by various linguists. Further research in linguistics, archeology, and anthropology will hopefully soon settle this debate.

Alan Cooper's working group (2017) carried out a large-scale study of the mitochondrial DNA of 111 Australian aborigines, which were stored and made available by the University of Adelaide with the consent of the participants from archive material from the period from 1920 to 1970 . It was confirmed that immigration from Asia began around 50,000 years ago ( New Pleistocene ). According to Cooper et al., The routes of propagation took place across the then common continent Sahul, both along the east coast and the west coast of Australia. According to these findings, the immigrant human groups formed individual, settling, local and permanent communities . This assumption is confirmed by the studies of various linguists , since many Australian languages ​​developed in isolation.

A map of the languages. Different colors represent different language families From west to east:

Traditionally, the Australian languages ​​have been divided into two dozen language families . The linguistic-genetic relationship based on a suggestion by Nicholas Evans et al. from the University of Melbourne together with information on the number of individual languages . It should be noted that different languages ​​are written differently, e.g. B. rr = r, b = p, d = t, g = k, dj = j = tj = c, j = y, y = i, w = u, u = oo, e = a.

In addition, there is the isolated language Minkin , about which too little material is available to be able to conclusively judge whether it belongs to one of the groups Yiwaidjan or Tankic.

The Australian Bureau of Statistics summarizes the languages ​​in the following groups: