Schematic representation of the human mtDNA

In technical terms, mitochondrial DNA , or mtDNA for short , is the double-stranded, mostly circular DNA inside (matrix) of the mitochondria . Under the influence of cited specialist literature, this term is increasingly gaining ground against the foreign German word “mitochondrial DNA”. The mitochondrial genome is called the mitogenome or (less often) the chondrioma . The mtDNA was discovered in 1963 by Margit Nass and Sylvan Nass using electron microscopic methods and in 1964 by Ellen Haslbrunner, Hans Tuppy and Gottfried Schatz based on biochemical measurements.

The mtDNA of multicellular organisms is usually organized in a circular manner, i. That is, it consists of a double strand of DNA closed into a ring. In many unicellular organisms and also in some multicellular organisms (e.g. in some species of Cnidaria ), linearly organized mtDNA has also been detected (e.g. in the ciliate Tetrahymena or the green alga Chlamydomonas reinhardtii ). The ends of this linear mtDNA form telomerase- independent telomeres with different replication mechanisms , which makes them interesting research objects , since there are many pathogens among the protists with linear mtDNA . The replication and transcription of the mtDNA is controlled by the mtDNA control region .

Although an mtDNA-specific DNA polymerase is present (the nucleus-encoded Pol γ), the presence of its own mtDNA does not allow mitochondria to divide and multiply regardless of the cell in which they are located. However, the division frequency of the mitochondria is only indirectly dependent on the division frequency of the cell. The mtDNA contains some, but not all, of the genes for the enzymes in the respiratory chain and genes that are responsible for the structure and reproduction of the mitochondria. However, the genes of more than 90% of the proteins that make up a mitochondrion are located in the nucleus and are synthesized in the cell's cytoplasm . Following transcription and translation, the finished proteins are imported into the interior of the mitochondria via the two mitochondrial membranes with the aid of a complex translocation machinery (TOM / TIM) .

The mtDNA is organized within the matrix in so-called nucleoids , a cell nucleus equivalent , as can also be found in prokaryotes . These contain both the nucleic acid and proteins.

The presence of its own DNA is unique among the cell organelles of animals ; in plants , the chloroplasts (and other plastids ) have the same property. This is the starting point for the endosymbiotic theory , which states that mitochondria and chloroplasts were originally independent organisms that were incorporated into animal or plant precursor cells in the course of evolution and now take on certain tasks for these cells. Further evidence of this is that mitochondria are roughly the same size as small bacteria, have circular DNA and are surrounded by two membranes. The protein synthesis machinery (e.g. mitochondrial ribosomes ) of the mitochondria is also very similar to that of prokaryotes . Furthermore, like bacterial DNA , mtDNA contains no real histones and hardly any introns . In bacteria, mitochondria and plastids, however, the DNA is compressed by functionally histone-like proteins (HLPs, English histone-like proteins ) that are homologous to one another .

Strangely enough, the pattern described cannot be found in the mitochondria of the human louse ( Pediculus humanus ). Instead, the mitochondrial genome is arranged here in 18 minicircular chromosomes, each 3–4 kb long and coding for one to three genes. This pattern can also be found in other real animal lice ( Anoplura ), but not in jaw lice ( Mallophaga ). It has been shown that recombination occurs between the minichromosomes . The reason for this difference is not known.

Variants in the genetic code

Some of these differences should be viewed as pseudo changes in the genetic code due to the common mitochondrial phenomenon of RNA editing . In higher plants, CGG was believed to code for tryptophan rather than arginine - however, it was discovered that the codon in the processed RNA is the UGG codon, which is consistent with the standard genetic code for tryptophan. It is noteworthy that the mitochondrial genetic code has gone through a parallel development within a group of arthropods , with some organisms clearly translating AGG into lysine (instead of serine).

Mitochondrial genomes have far fewer genes than the bacteria from which they are believed to be derived. Although some genes were lost, many were transferred to the nucleus ( endosymbiotic gene transfer , EGT), such as B. for the protein subunits of the Respiratory Complex II. It is assumed that this has happened relatively frequently in the course of evolution since the emergence of eukaryotes. In some organisms such as Cryptosporidium , the mitochondria lack DNA completely. Presumably all of their genes were lost or transferred to the nucleus. In Cryptosporidium , the mitochondria have a different system for the synthesis of ATP , which makes the parasite resistant to many classic mitochondrial inhibitors such as cyanide , azide and atovaquone .

The mtDNA of humans 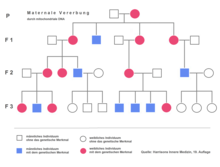 In genealogy and anthropology , the inheritance of mtDNA plays a major role. On the one hand, this has to do with the fact that mitochondria in many organisms are usually only passed on maternally , i.e. only from the mother to the offspring. The mitochondria of the sperm are located in its middle section, which penetrates the gelatinous shell of the egg cell during fertilization, but does not become part of the zygote . The egg also secretes enzymes that dissolve the mitochondria of the sperm. More precisely, they are labeled with ubiquitin and then broken down. The latest findings suggest that this process does not always succeed, i.e. that male mtDNA is occasionally passed on.

The mtDNA mutates at a very constant rate, so that one can say relatively precisely how closely (in terms of time) two tribes are related, i.e. i.e., when the ancestors of these tribes separated. In anthropology it could be shown that the American indigenous population is most closely related to the indigenous population of Eurasia (that is, descended from a common ancestor); in addition, hypotheses about the origins of the present man ( mitochondrial Eva ) could be confirmed. The Genographic project , started in 2005 , which examines the genetic makeup of humans on all continents with the aim of gaining more precise knowledge about the relationships between the various populations and the course of the settlement of the earth by Homo sapiens , makes use of these properties of the mtDNA.

In the case of maternal inheritance of mutations in the mtDNA, affected women pass the trait on to their children of both sexes. Affected men do not pass it on to any of their children. A few years ago so-called paternal inheritance of mtDNA was discovered in several animal species and in one case in humans. It appears to be relatively rare (in mice the rate is 1: 10,000). It ensures that the paternal mtDNA is also transmitted to the offspring. The exact processes have not yet been clarified; there are also still no reliable figures on how often this form of inheritance occurs in humans. Since 2002 there is only one known case that a special peculiarity / mutation of the mtDNA was inherited from the father to his son: While the blood mtDNA was inherited from the mother, 90% of the muscle mtDNA was inherited from the father. According to further studies, it has generally been assumed so far (as of 2009) that this particular finding does not contradict the assumption that mitochondria in humans can generally only be inherited from the mother's side; methodological problems of the analysis could simulate paternal inheritance.

Svante Pääbo and colleagues succeeded in 2008, the mitochondrial genome of a Neanderthal ( Homo neanderthalensis , completely), who lived 38,000 years ago, with a hitherto unattained accuracy sequence .

It has been known since around 2013 that, in addition to the proteins formed in the mitochondrion, various peptides are formed here. These peptides are partially released into the cytoplasm and have regulatory tasks. There are no independent genes coding for these peptides; they are coded within open reading frames, overlapping with protein-coding genes. Accordingly, their exact number is still unknown today. The first mitochondrial peptide to be discovered was humanin , discovered in 2001 by Yuichi Hashimoto , whose coding sequence overlaps with mt-RNR2. It is important in protecting the cell from oxidative stress . In 2020, a total of eight mitochondrial-derived peptides (MDP) are known. All have a cellular protective function comparable to humanin. Some may also be of importance as chaperones .