Tryptophan , abbreviated as Trp or W , is in the L form (see Fischer projection ) a proteinogenic α - amino acid with an aromatic indole ring system. Together with phenylalanine , tyrosine and histidine, tryptophan is therefore one of the aromatic amino acids. It is one of the essential amino acids , so it cannot be produced by the human body and must be taken in with food.

Tryptophan has a stereocenter, so there are two enantiomers. The naturally occurring form is called L -Tryptophan [Synonym: ( S ) -Tryptophan]. The enantiomer D- tryptophan (mirror image of L- tryptophan) and the racemate (1: 1 mixture of D- and L-form) are of little importance. If “tryptophan” is mentioned in this article or in the literature without any additional name ( prefix ), L- tryptophan is meant.

Tryptophan is a component of proteins and peptides . Since the human organism is unable to produce this amino acid, it is dependent on it to be supplied with food. The following examples each relate to 100 g of the food; the percentage of tryptophan in the total protein is also given:

All of these foods only contain chemically bound L- tryptophan as a protein component, but no free L- tryptophan.

Estimates of the daily requirement for healthy adults range, depending on the method used, from 3.5 to 6 mg tryptophan per kilogram of body weight. There is evidence that the need for tryptophan can vary greatly from person to person.

Tryptophan is sensitive to oxidation . It can be oxidized to 2-hydroxytryptophan under comparatively mild conditions, for example by dimethyl sulfoxide (DMSO) in hydrochloric acid .

In a bacterium like E. coli , the cellular tryptophan synthesis is controlled via the trp operon , in which the segments of the genes trpE , GD , CF , B and A follow one another according to a regulatory area - here for repression and also for attenuation . These are transcribed together as polycistronic mRNA and translated into polypeptides lead to the formation of the sometimes heterotetrameric associated proteins. These multi-enzyme complexes unfold depending according to their sub-units, the effectiveness of anthranilate synthase (trp E and trp-G) and anthranilate phosphoribosyl transferase (trp-D), phosphoribosyl anthranilate isomerase (TRP-F) and indole glycerol phosphate synthase (trp-C), as well as tryptophan synthase (trp-A and trp-B).

The industrial production of L- tryptophan is also done biosynthetically from L -serine and indole and uses a wild-type mutant of Escherichia coli . The conversion is catalyzed by the enzyme tryptophan synthase.

As a component of nutrient solutions for parenteral nutrition , L- Triptophan is widely used, along with other amino acids.

The effects of L- Triptophan are often described as mood-enhancing, calming and weight-reducing. The mood-enhancing effect of L- Triptophan is probably based on the fact that it is converted to serotonin in the human body . It is believed that increased levels of serotonin can improve mood and relieve depression . The main side effects of high doses are daytime sleepiness, dizziness, drowsiness, nausea, diarrhea and headaches .

L -Tryptophan is considered a "natural antidepressant ", it is said to have a certain effectiveness in depressive illnesses with at the same time low side effects. However, there is no scientific evidence of the effect of additional tryptophan administration (e.g. as a dietary supplement).

As a simple dietary supplement, L- Triptophan is only useful if there is a confirmed deficiency, which is practically unknown in industrialized countries. With fructose malabsorption , however, a significantly reduced serum tryptophan level has been observed. The level of this essential L- amino acid in the nutrient fluid of the brain cannot be adjusted at will by consuming protein- rich food, because L- tryptophan competes with five other amino acids at the blood-brain barrier for penetration into the nutrient fluid of the brain; namely with the branched chain (these are L - valine , L - leucine and L - isoleucine ) and two aromatic ( L - phenylalanine and L - tyrosine ) amino acids. Nevertheless, the L- tryptophan level can be raised through food intake by consuming carbohydrates with a protein-rich meal. Because of an increased insulin level, the branched-chain amino acids are preferentially absorbed by the muscles of the body. Although the amino acids valine, leucine, isoleucine, arginine and phenylalanine stimulate the release of insulin, the release of insulin is additionally stimulated by carbohydrates and the effect is increased. The competition for the carrier proteins at the blood-brain barrier is reduced, and tryptophan as well as phenylalanine and tyrosine can cross the blood-brain barrier more easily as a result.

In the case of serotonin deficiency, L - 5-hydroxytryptophan can be taken instead of L- tryptophan , which should be metabolized to serotonin much more efficiently, so that the dose can be reduced. However, the use is associated with the risk of serious damage to health with long-term and / or high-dose use and generally with more side effects.

L -Tryptophan is not approved for the treatment of depressive illnesses in Germany. As a mild sleeping aid , tryptophan-containing drugs may be dispensed without a prescription (available as tablets with 500  mg L- tryptophan in variable pack sizes). The label on the pack must warn of consumption by pregnant and breastfeeding women as well as children and adolescents, indicate the possible impairment of the ability to drive and advise a doctor or therapist to be consulted before consumption. In Austria and Switzerland, L -Tryptophan requires a prescription.

L -Tryptophan was banned in the United States until January 1996. The ban goes back to the use of presumably contaminated L- Triptophan by the Japanese company Shōwa Denkō in the 1980s. The impure substance contained u. a. 'Dimer' tryptophan derivatives, produced by genetic engineering, are said to have been responsible for the occurrence of EMS cases ( eosinophilia-myalgia syndrome ), some of which were fatal. The origin of EMS is not fully understood and its recurrence in connection with the intake of tryptophan cannot be ruled out. Finally, symptoms of EMS with tryptophan derivatives and with uncontaminated tryptophan could also be triggered in animal experiments.

The codon UGG codes for the amino acid tryptophan. 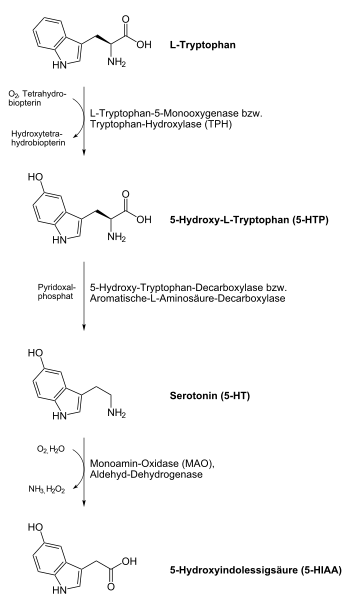 Biosynthesis and breakdown of serotonin.

The degradation of L- tryptophan requires the cleavage of both aromatic rings, which is catalyzed by oxygenases . The pyrrole ring is first broken by the tryptophan-2,3-dioxygenase , whereby kynurenine is produced via the splitting off of formic acid (with the help of the arylformamidase ) . This is converted to 3-hydroxykynurenine by kynurenine-3-monooxygenase ( EC 1.14.13.9 ). The cofactor is FAD , while the cosubstrates are molecular oxygen and NADPH . After alanine has been split off (using kynureninase ), another dioxygenase, 3-hydroxyanthranilate-3,4-dioxygenase , catalyzes the splitting of the remaining aromatic ring, so that after several reaction steps, acetacetate is finally present. The unstable aldehyde, which is formed after the application of the second dioxygenase and spontaneously converts to quinolinate , is partly used in NAD biosynthesis .

The breakdown of tryptophan into alanine and acetoacetate requires several oxygenases.

Several of the enzymes involved in the breakdown appear to lose activity in rats with age.

The oxidation of tryptophan or tryptophan units of proteins by photo- oxidation or oxygen radicals results in a large number of oxidation products, all of which have not yet been identified.

Indolamine-2,3-dioxygenase (IDO) is an isoenzyme of tryptophan-2,3-dioxygenase (tryptophan pyrrolase), which is activated during an immune reaction to ensure the availability of tryptophan for e.g. B. virus-infected cells or cancer cells and thus limit their growth. For this reason, reduced tryptophan levels with a simultaneously increased rate of degradation are also observed in the blood of patients with such diseases: the more pronounced the tryptophan reduction in the patient, the greater the probability of a shorter survival time. The reduced availability of tryptophan is also one of the reasons for an increased tendency towards depression in these patients.

This article is about a health issue. It is not used for self-diagnosis and does not replace a diagnosis by a doctor. Please note the information on health issues !
Proteinogenic amino acids