Methionine is chiral because it contains a stereocenter. There are thus two enantiomers , the ( S) -form [(-) - L- methionine] and the ( R ) -form [(+) - D- methionine]. The D methionine is practically no importance when methionine without descriptor mentioned is always L methionine meant.

The American bacteriologist and immunologist John Howard Mueller discovered in 1922 that the addition of a mixture of the previously known amino acids to colonies of streptococci (Streptococcus hemolyticus) was not sufficient for their growth. However, this was achieved with the addition of casein . Therefore, Mueller assumed that casein must contain at least one other amino acid. In the subsequent investigation of casein, Mueller was then able to isolate methionine for the first time. Barger also gave the correct empirical formula. The elucidation of the structural formula and the synthesis were achieved in 1926 by George Barger and his assistant Frederick Philip Coine, and in 1931 Barger published an improved synthesis in collaboration with Weichselbaum. The name methionine, as an abbreviation for "γ-methylthiol-α-amino-butyric acid", comes from S. Odake (1925).

A synthesis process on an industrial scale for racemic methionine from acrolein , methyl mercaptan and hydrogen cyanide was developed from 1946 by Werner Schwarze , Hans Wagner and Hermann Schulz at Degussa AG in the research laboratories relocated to Constance. With the synthesis of the amino acid one wanted to make a contribution to the protein deficiency that was present after the Second World War, especially among those returning from the war ( hunger edema ). The starting materials hydrogen cyanide and acrolein were produced at Degussa, and the construction of a test facility with a production of 30 tons per year only took a year. The Chemiewerk Homburg, which belongs to Degussa, soon brought the methionine-containing drug thiomedon onto the market, and from 1953 it was used as a feed additive in agriculture (laying hens).

Methionine is found in the proteins of all living things. Since the human organism cannot produce this amino acid itself, it is dependent on it to be supplied with food . The following examples for the methionine content each relate to 100 g of the food ; the percentage of total protein is also given:

All of these foods contain almost exclusively chemically bound L- methionine as a protein component, but no free L- methionine.

Besides cysteine , methionine is the only sulfur-containing proteinogenic amino acid. The thioether group makes it less reactive than cysteine, whose sulfur atom is part of a thiol group (mercapto group). Methionine is mainly present as an inner salt or zwitterion , the formation of which can be explained by the fact that the proton of the carboxy group migrates to the lone pair of electrons on the nitrogen atom of the amino group :

In the electrical field, methionine does not migrate at the isoelectric point , which is at pH 5.74, because it is then uncharged as a whole. At this pH value, methionine also has its lowest solubility in water.

Methionine is a supplier of methyl groups (-CH 3 ) z. B. for the biosynthesis of choline , creatine , adrenaline , carnitine , nucleic acids , histidine , taurine and glutathione ( transmethylation ). The metabolically active form of methionine is S-adenosylmethionine .

In the organism, methionine is used, among other things, to produce the non-essential, also sulfur-containing proteinogenic amino acid cysteine . In the absence of cysteine ​​in the diet, the mean methionine requirement of healthy adults is around 13 to 16 mg per kilogram of body mass per day. The daily amount that is sufficient for almost every healthy adult ( RDA ) is estimated at 21 mg per kilogram of body mass. Sometimes this amount is also referred to as the total sulfur-containing amino acid requirement. (Correctly, however , moles rather than grams must be selected as the unit of measurement , since the molar mass of methionine and cysteine ​​differ noticeably.) The extent to which cysteine ​​can replace methionine in humans has not yet been sufficiently clarified and appears to be experiment-dependent. The figures for the average methionine requirement when the diet contains an excess of cysteine ​​vary between 5 and 13 mg per kilogram of body mass for healthy adults.

In bacteria, plants and yeasts, cysteine ​​is converted into homocysteine via cystathionine (via cystathionine-β-lyase ) , from which methionine is produced. Methionine cannot be synthesized by humans or many animals, but has to be ingested with food.

In the context of translation , protein synthesis is started with methionine. In archaea and eukaryotes, the initiator tRNA is a tRNA i Met loaded with methionine , in bacteria it is a tRNA i fMet that transmits N- formyl methionine (fMet). These tRNAs usually bind to the start codon via their anticodon . The first amino acid at the N terminus of the resulting polypeptide chain is in all living thus the (formylated) methionine. However, the first methionine of the resulting protein is often separated or modified later, e.g. B. by acetylation of the amino group. AUG

SAM and thus also methionine continue to be the starting material for the synthesis of polyamines ; methionine can be recovered from the byproduct methylthioadenosine - the so-called methionine salvage metabolic pathway.

Methionine is only irreversibly broken down if there is an excess. In this case, two possible metabolic pathways can be activated:

This safety valve in the event of sulfur excess can of course only function up to a certain limit without side effects. Older studies showed acidosis in newly weaned rats (methionine 600 mg / day); hepatic coma in dogs concomitantly exposed to elevated ammonium levels; and even death in sheep that received large amounts of the racemate in their gizzards (24 g / day).

Based on the assumption that an increased level of SAM could cause an increased rate of DNA methylation , Amaral and others investigated whether rats with increased methionine intake (2% in the diet over six weeks) had less stable DNA or methylation of the p53 gene did not find any of these effects. The diet, on the other hand, replenished a lowered level of glutathione in the kidneys that had previously been artificially caused. This shows that excess methionine first benefits the cysteine ​​pool before sulfate is excreted.

The industrial synthesis of racemic methionine (mixture of 50% L- methionine and D- methionine) is based on petrochemical raw materials, in particular propene, sulfur, methane and ammonia. The intermediates methyl mercaptan 1, acrolein 2 and hydrocyanic acid are thus prepared using common methods . The Michael addition of methyl mercaptan 1 to the carbon-carbon double bond of acrolein 2 then yields the intermediate 3-methyl mercaptopropionaldehyde 3 . This aldehyde 3 is then converted with ammonia, carbon dioxide and hydrogen cyanide (or staghorn salt and sodium cyanide ) into a hydantoin derivative 4 , the basic hydrolysis of which leads to an alkali salt of methionine. By neutralization with an acid (carbon dioxide or sulfuric acid), racemic methionine receives 5 :

For the resolution of the racemic methionine is acetylated on the nitrogen atom. The racemic N -acetyl-methionine [1: 1 mixture of ( S ) - 6 and ( R ) - 6 ] is treated with the enantioselective enzyme L -acylase, the natural L- methionine [( S ) - 5 ] formed with elimination of acetic acid / acetate, while the D form of N - acetyl methionine [( R ) - 6 ] remains unchanged: 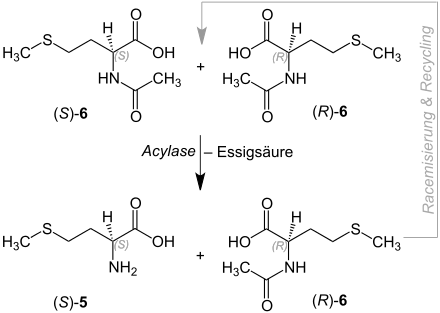 Then, L methionine separated. The D - N -acetyl-methionine [( R ) - 6 ] is racemized with acetic anhydride and recycled.

When excess methionine is metabolized, the sulfur contained in the substance is oxidized to sulfuric acid and excreted through the kidneys, acidifying the urine . The mechanism of urinary acidification can support the healing of some diseases. L- methionine is used therapeutically for:

In diagnostics, it is used in the form of 11 C- S -methyl- L- methionine as a radiopharmaceutical to visualize brain tumors in positron emission tomography .

DL methionine (i.e. the racemate ) is used to supplement (supplement) animal feed. The nutritional value of feed for chickens is increased by adding small amounts of DL methionine. This is of particular economic benefit if the natural feed ingredients have a deficient content of sulfur-containing amino acids (cysteine ​​/ cystine and methionine). By far the largest quantities of synthetically obtained methionine (> 400,000 t per year) are used for this purpose. The largest manufacturer is Evonik (formerly Degussa) with a capacity of 580,000 t per year.

The methyl group of the methionine is split off by heating methionine with aqueous hydriodic acid . When evaporating, the hydroiodide of homocysteine thiolactone is formed as a cyclization product with elimination of water .