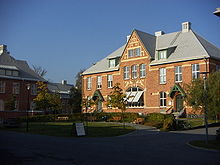 The Department of Mathematics

In 1869 an association was founded in Stockholm with the aim of establishing a university in Stockholm. After a fundraising campaign and with the support of the City of Stockholm, modest teaching in mathematics, physics, chemistry and geology began in 1878. In the following years, too, the natural science subjects dominated. The first chairs were established in the 1880s, all but one of which belonged to the natural sciences. Among the first professors were the mathematician Sofja Kowalewskaja , the first female professor in Sweden and probably also Europe, and the chemist Svante Arrhenius , who received the Nobel Prize in Chemistry in 1903 .

In 1904 it was possible for the first time to obtain doctorates at this university. The Faculty of State and Law was founded in 1907, the Faculty of Humanities in 1919 and the Faculty of Social Sciences in 1964. In the 1930s there was discussion about merging the various colleges in Stockholm into one university, but these plans were abandoned in the 1950s.

In 1960 it was converted to a state university and the construction of a university campus began in the Frescati district . At the same time the number of students multiplied (from the 1950s to 1970 from 5,000 to 30,000). In 1977 the social college and the journalism college were integrated into the Stockholm University, a little later other smaller institutes and laboratories. The last major change took place on January 1st, 2008, when the Stockholm Teachers' College was integrated into the SU.

Today there are four faculties: the humanistic, the political and social science, the law and the natural science faculty. In addition, the SU operates two research centers for physics, astronomy and biotechnology and for computer science together with the Royal Technical University . Stockholm University has approximately 4,600 faculty, 1,800 of whom are visiting teachers and lecturers, and 33,000 are students.

V
Universities and colleges in Sweden