The title of this article is ambiguous. Further meanings are listed under America (disambiguation) .
America

America extends on its north-south axis 15,000 kilometers from the 84th parallel north ( Cape Morris Jesup ) to the 56th parallel south ( Cape Horn ). The westernmost point is in North America at 172 degrees east on the Aleutian island of Attu . The double continent has a land area of ​​around 43 million km² and is therefore somewhat smaller than Asia .

America is home to over 980 million people. Much of America's populations are made up of immigrants, which is why the countries are referred to as immigration countries . The largest individual states on the continent are Canada , the United States , Brazil , Argentina and Mexico . The largest metropolitan areas in America are also located in these countries : New York City , São Paulo , Mexico City , Los Angeles and Buenos Aires .

The settlement of America is marked by an eventful history of over 15,000 years, which includes some of the first high cultures. This ancient American culture is regarded as the “ pre-Columbian ” period until around 1492, when the European discovery of America began a phase of colonization and intensive settlement of the continent. The former areas of the colonial empires became independent states in the 18th century. The Organization of American States (OAS) was founded in 1948 as a continental alliance and unites almost all American countries.

When the Freiburg cartographer Martin Waldseemüller was working on a new edition of Ptolemy's Geographia , his colleague, the poet Matthias Ringmann , had just read Vespucci's travelogues and mistook him for the discoverer of the new world. Ringmann wrote the accompanying document to the map drawn by Waldseemüller, which appeared together with her on April 25, 1507 under the title Cosmographiae Introductio . In it he wrote:

“[I] I don't see why (this part of the world) should not be called 'Amerige', the land of Americus or 'America' after the discoverer Amerigo, a man of wise mind: because both Europe and Asia are Names that are derived from women. "

Copies of the map spread faster than Waldseemüller could correct the mistake. In his largest map series from 1513, the name "America" ​​no longer appeared, instead he pointed out that the continent "had been discovered by Christopher Columbus on behalf of the King of Castile". Until his death he wanted to call “the newly discovered continent 'Brazil' or 'parrot land'”. Just a few years after the appearance of this card, experts were only talking about America, probably also because this was a successful word creation. The beautiful terrestrial globe from 1515 , the oldest of its kind, which represents the southern half of the New World, gives its name with "America". Later attempts by other cartographers to name the continent after Columbus only led to the naming of Colombia . Columbus' heirs only achieved through a legal process that Columbus was recognized as the discoverer of America.

An alternative theory was put forward in 1908 by the English local historian Alfred Hudd. According to this, the name America can be traced back to Richard ap Meryk (Anglicized Richard Amerike), a Welsh-English businessman and customs officer in Bristol , who paid large sums of money to the seafarer and explorer John Cabot . Even if this theory has not caught on, it is still supported by some authors to this day.

Alternative names of this continent are double continent , Western Hemisphere , New World , Overseas (imprecise), West (outdated), Fourth Continent (outdated; counted from a European point of view), West Indies (outdated, still today for the Caribbean region). Abya Yala is a self-designation of the continent of the Kuna living in Panamá and northwest Colombia .

The term " Indians " for the native Americans originated from the mistake that the coast reached was part of Asia. In the Iberian world and in colonial America, the continent was still called Indias, "The India", well into the 18th century . The English term Indian can mean both "Indian" and "Indian". To distinguish, the Native Americans are usually referred to as American Indians or Native Americans , in Canada also as Aborigines or First Nations .

America itself is in turn the namesake for the chemical element americium , which was discovered in 1944.

To North America in the narrower sense include Greenland , Canada , the United States , the majority of Mexico and several island states , more broadly Central America belongs entirely to the continent. From Cape Morris Jessup (Greenland 83 ° 39 'n. Latitude) to the isthmus of Darién (Panama 8 ° n. Br.) It is about 10,000 km. The highest peak in North America is Denali in Alaska ( Mount McKinley , 6,194 m). The Upper Lake with an area of ​​about 82,000 square kilometers is the second largest lake in the world (after the Caspian Sea ).

The mainland part of North America south of the isthmus of Tehuantepec is known as Central America . Central America along with the islands of the Caribbean is called Central America . Central America is generally not viewed as an independent continent, but largely as part of North America. Central America includes the southern part of Mexico , Belize , Guatemala , El Salvador , Honduras , Nicaragua , Costa Rica and Panama on the mainland; on islands are the states of Bahamas , Cuba , Jamaica , Haiti , Dominican Republic , St. Kitts and Nevis , Antigua and Barbuda , Dominica , Barbados , St. Lucia , St. Vincent and Grenada as well as overseas territories of other states, in particular the Turks and Caicos Islands , Puerto Rico , Virgin Islands , Anguilla , St. Martin , Saba , Sint Eustatius , Saint-Barthélemy , Guadeloupe , Martinique . Depending on the delimitation, Trinidad and Tobago and the larger northern part of Mexico are also counted as Central America for cultural reasons . 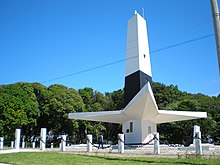 South America includes the states of Colombia , Venezuela , Guyana , Suriname , Ecuador , Peru , Bolivia , Chile , Argentina , Uruguay , Paraguay and Brazil on the mainland as well as Trinidad and Tobago , which is often part of North and Central America, off the north coast and the overseas French Guiana Department on the mainland, the Dutch islands of Aruba , Bonaire and Curaçao off the north coast and the Falkland Islands in the southeast of the continent, which are disputed between Argentina and Great Britain . Paraguay and Bolivia are the only landlocked states in America.

More than half of South America is tropical. In the western area the largest mountain range in America, the Andes , dominates the landscape. The highest mountain in both South America and the entire double continent is the glaciated Aconcagua, which is located near the Chilean border in the Argentine province of Mendoza , at 6,962.97 meters . The Andes were formed by the subduction of the so-called Nazca plate under the South American plate. Along the tectonically very active western coast there is a chain of volcanoes that runs further south to the volcanic and geyser tundra called Tierra del Fuego .

The extremely arid Atacama Desert lies between the Andes and the Pacific in what is now northern Chile . Within the Andes, the highlands of the Altiplano are densely populated around Lake Titicaca , the largest lake in South America, despite its altitude of over 3,000 m above sea level and the correspondingly cool and dry climate .

In the north-east there is the mountainous country of Guyana and south of it the Amazon basin with the Amazon , its countless tributaries, fertile floodplains and primeval forests. The Amazon carries a fifth of the fresh water flowing into the sea . The basin is bordered in the south by the heavily weathered Brazilian mountains .

The division of the world into three economic areas is based on the economic triad with a region with Europe as the center, Asia-Pacific ( Far East / East Asia including Siberia and to Australia, APAC, JAPA, APJ for short) with Japan and China as the forerunners, and the two / three Americas. Other regions are then added to these industrialized centers, although the allocation of the countries in the sales departments of the various companies is not uniform.

Americas (short AMER, or NCSA: North, Central and South America ) includes among others:

In the English-speaking world, North and South America are viewed as separate continents. " America " is used (like "Amerika" in German) as a short form for the United States , while the double continent is referred to as " the Americas " (plural).

In Latin America and in the Spanish and Portuguese- speaking areas of Europe, “América” is considered to be a continent. 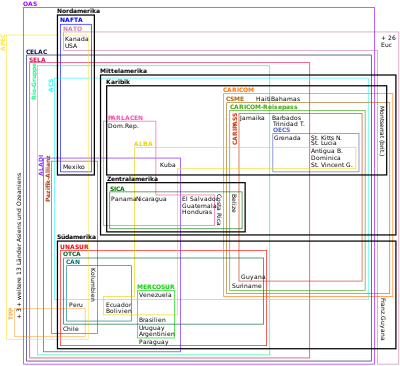 There are only a few organizations such as B. the Organization of American States and the planned American Free Trade Area , which affect the entire double continent. Most American organizations and alliances only affect Latin America and the Caribbean.