Lake Nicaragua (Spanish: Lago de Nicaragua ), also known as Cocibolca , is the largest inland lake in Central America and is located in the southwest of Nicaragua near the state border with Costa Rica .

In the north it is connected to Lake Managua via the Río Tipitapa .

There are more than 400 islands in the lake , the largest being Zapatera in the north and Ometepe in the middle of the lake. Ometepe consists of two volcanoes, the Concepción volcano at 1,610 m and the Maderas volcano at 1,340 m. Eruptions of both volcanoes have led to the fact that the originally two islands have merged into a single island due to the lava flows. Prehistoric stone statues and petroglyphs can also be found here . Perhaps the most famous group of islands are the Solentiname Islands in the south of the lake, where Ernesto Cardenal lived for a long time.

The lake is an important traffic artery: numerous ferries connect a number of coastal towns and the inhabited islands with one another. Time and again there have been and are considerations to establish a connection between the Pacific and Atlantic via Lake Nicaragua - the Nicaragua Channel . However, this would mean that the lake would gradually change from a freshwater to a saltwater lake through the connection to the two oceans. Critics of the canal project fear an ecological catastrophe.

Nicaragua, Ometepe, view from the Concepción volcano over Lake Nicaragua in northwest direction

According to legend, the islands of Ometepe and Zapatera as well as Lake Nicaragua emerged from a tragic love story: this is how the respected Nagrando fell in love with the beautiful chief daughter of a neighboring tribe called Ometeptl . Both Indian tribes, however, were at odds over territorial claims and power issues. According to ancestral law, love between warring tribes was forbidden. The couple therefore soon had to flee their home villages and hid in a valley. However, since their love was not kept secret, they were persecuted by their tribesmen. Finally, out of desperation, both decided to commit suicide and opened their wrists. Ometeptl fell backwards, Nagrando stumbled a few more steps and fell down too. The blood of both filled the valley and covered their bodies - today's Lake Nicaragua. Of Ometeptl's body, only her breasts protrude above the water level, today's volcanoes Concepción and Maderas. From the body of Nagrando, one can only see, a little further away, the tips of the island of Zapatera . 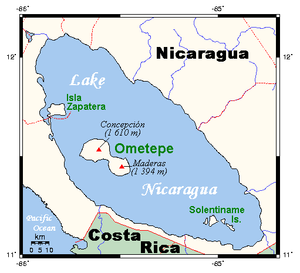