Virgin Islands is a redirect to this article. See also: La Vierge (island) or Virgin Island .

In the east, the Virgin Islands are separated from Anguilla and St. Martin and their side islands by the Anegada Passage, which is at least 80 kilometers wide . The closest island is Sombrero , which is politically part of Anguilla .

In the southwest, the 21 km wide Pasaje de Vieques separates the island of Vieques from the main island of Puerto Rico. 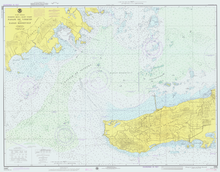 The first settlers of the islands belonged to the tribe of the Arawak counting Taíno and colonized the islands around 300 n. Chr. From South America. Around 1000 the Caribs invaded the islands. Christopher Columbus docked in the Virgin Islands on November 14, 1493 on his second voyage to the New World . He first named her "Santa Ursula y las Once Mil Vírgenes" ( Saint Ursula and the eleven thousand virgins). The islands were taken over for the Spanish Crown, but not settled. In the travel report of Diego Alvarez Chanca, who was traveling along at the time, it says: “A whole group of islands rise from the sea, some densely forested, others quite rocky. Columbus calls the largest one, Santa Ursula, the other he names 'Las Once Mil Virgenes'. "

Around 1600 Europeans from other nations penetrated the islands and used them as a base for piracy and smuggling, but also for attacks on the Spanish colonies of the Caribbean and Latin America. From this time onwards the indigenous population began to be exterminated by the colonizers and the diseases they brought in. Officially, the islands were owned by the English and Danish ( Danish West Indies ) in the 17th century , the islands of Tortola , Anegada and Virgin Gorda were temporarily owned by the Netherlands , but were annexed by the English in 1672 and form the British Virgin Islands today . Vieques and Culebra as well as their various smaller secondary islands east of the Virgin Passage remained in Spanish possession until the Spanish-American War . As a result of this war, the Spanish Virgin Islands became US territory together with Puerto Rico , which was administratively annexed to this in 1898 . Under the administrative auspices of D. Hamilton Jackson , the USA bought the Danish colonial property of the Virgin Islands in 1917 for 25 million dollars, which has since been a separate, unincorporated US American territory as the US Virgin Islands . Adjusted for inflation, the purchase price is equivalent to 498 million dollars or 420 million euros or 452 million Swiss francs.

The majority of the residents - a mix of African and European groups - live on the main islands of St. John , St. Thomas and Saint Croix (all part of the US Virgin Islands). More people live on St. Croix alone (approx. 53,000) than on all of the Spanish (approx. 11,000) and British Virgin Islands (approx. 23,000) combined.

The currency in all of the Virgin Islands is the US dollar .

Tourism is the most important industry in the US Virgin Islands.

The British Virgin Islands are different, as they mainly attract tax evaders . Because there are no taxes on profits or income. As a result, 430,000 letter box companies were registered there. The fees to be paid for this account for 60% of government revenue (as of 2015).