The economy is closely linked to the more heavily populated American Virgin Islands , so the official currency is the US dollar. The service sector is dominant, in particular the tourism and offshore financial sectors .

In the 1st century BC Arawak settled the islands, but were subjugated by the Caribs in the 15th century . In 1493, Christopher Columbus discovered the Virgin Islands for the Europeans. In 1555, Spanish troops defeated the indigenous population and exterminated them in the decades to come.

Until the beginning of the 17th century, the islands were visited several times by Spanish and English ships on their expeditions to South and Central America , but initially they were not colonized . It was not until 1615 that a permanent settlement of the Dutch privateer Joost van Dyk appeared in Spanish records on Tortola. Soon after, the Dutch West India Company recognized the strategic importance of the Virgin Islands. Several entrenchments and small forts were built by Dutch settlers in the period that followed; there were numerous armed conflicts with Spanish troops.

After the outbreak of the Third Anglo-Dutch War , the area was annexed by England in 1672 and incorporated into the colony of the British Leeward Islands . The British established plantations for the cultivation of sugar cane , for which it is a growing number of African deported slaves needed. In the middle of the 18th century there were already over 6,000 slaves here. Today around 75% of the population is of black African descent. At the beginning of the 19th century there were several slave revolts; In 1834 slavery was officially abolished.

The Leeward Islands Federation , founded in 1871, was dissolved in 1956. The British Virgin Islands formed their own crown colony from 1960 and gained greater internal autonomy with the 1967 constitution. The territory has been on the UN list of sovereign territories without self-government since 1946 . 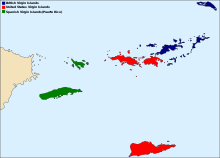 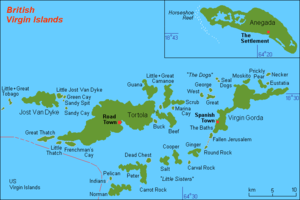 The area has a size of 150 km² and consists of 16 inhabited and over 20 uninhabited islands. The four main islands are Anegada , Jost Van Dyke , Tortola and Virgin Gorda . Complete list:

Anegada Island is made up of coral reefs and limestone and is relatively flat; the other islands are of volcanic origin and are mountainous or hilly. The highest point of the islands is Mount Sage at 523 m on Tortola.

The climate is tropical and humid, the temperatures are moderate due to winds. Hurricanes and tropical storms occur from July to October. The natural fresh water resources are limited. Aside from a few springs and periodic watercourses on Tortola, which dry out in summer, the islands' water supply is based on wells and rainwater cisterns.

See also : List of Settlements in the British Virgin Islands

The British Virgin Islands are an Associate Member of the Caribbean Community and the Organization of Eastern Caribbean Nations . You are one of the sponsors of the University of the West Indies .

The ultimate executive authority of the British Virgin Islands is held by Queen Elizabeth II . In this capacity, she is represented by the governor , who is appointed by her on a proposal from the British government. The United Kingdom is responsible for foreign and defense policy.

The constitution of the archipelago was last enacted in 2007. The head of government is the prime minister , until 2007 the chief minister , who is appointed by the governor along with the four other members of the government from the members of the legislative council. The Legislative Council (House of Assembly) consists of 13 members elected by the people, the speaker and the Attorney General who is not entitled to vote .

Augustus Jaspert has held the office of governor since 2019 . Andrew Fahie of the Virgin Islands Party (VIP) has been the acting Prime Minister since 2019 . He replaced Orlando Smith from the National Democratic Party (NDP).

The economy, one of the most stable and thriving in the Caribbean, is largely dependent on tourism . The direct contribution of tourism to the gross domestic product was around 34% in 2016; the total contribution to the economic strength of the country, which also takes into account the indirect effects on other economic sectors, exceeds 95%. Approximately 825,000 tourists, including more than 440,000 cruise passengers mainly from the United States , visited the islands in 2006. The main source of income for the local tourism industry is chartered out yachts.

Agriculture , the main activity of which is livestock, is of comparatively minor importance . The poor quality of the soil allows only a limited supply of the local population.

The gross domestic product in 2016 was nominally around 1286 million US dollars.

The economy is closely tied to that of the US Virgin Islands . The US dollar has been the official currency since 1959 .

Since the mid-1980s, the government has offered companies the option of being based in the islands with a mailbox company. The fees for setting up such companies now account for more than 50% of government revenue. Around 450,000 letterbox companies were registered on the islands in 2012. By 2015 there were already 800,000 companies.

In a ranking of the most important financial centers worldwide, the British Virgin Islands took 60th place (as of March 2018).

The road network comprises 200 km of paved roads (as of 2007), there is left-hand traffic . There is a port in Road Town.

The following important information is missing from this article or section:
Flora and fauna, flag
Help Wikipedia by researching and pasting it .