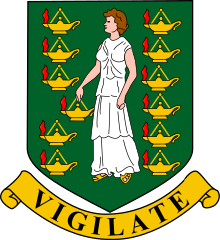 The coat of arms of the British Virgin Islands has been in use since November 15, 1960 . It shows a green shield on which is St. Ursula of Cologne , patron saint of the islands, who carries an oil lamp. Around them there are eleven other oil lamps, which symbolize the eleven or eleven thousand companions (Virgins) of St. Ursula, which the tradition of cooperation with this in Cologne by the Huns under Attila the martyrdom suffered.

Directly below the sign is the motto: VIGILATE (from Latin for example: Be vigilant!). This motto (Mt 25,1-13a) together with the burning oil lamps in the coat of arms probably refers to the parable of the five wise and the five foolish virgins in the Gospel of Matthew 25 : 1–13. The wise virgins supplied themselves with oil in time, that is, they prepared themselves in time for the arrival of the Bridegroom ( Christ ). He finds her awake on his arrival and takes her with him to the wedding (into the kingdom of heaven ). Saint Ursula and her companions (all of whom were virgins) are thus portrayed as inwardly prepared to enter heaven (i.e. martyrdom ).

The coat of arms can also be found on the flag of the British Virgin Islands .

Coat of arms of the states of North America