This article or section needs to be revised. For details should be on the talk page, under " missing essential information." Be specified. Please help to improve it , and then remove this flag. 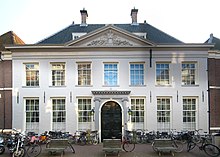 The West Indies House in Amsterdam, headquarters of the company from 1623 to 1647

Former warehouse of the company in Amsterdam

The warehouse in a depiction from 1655

The Dutch West India Company ( Dutch Geoctroyeerde West India Company , often short WIC ) was a Dutch trading company , by the on June 3, 1621 United Republic of the Seven Netherlands an exclusive trade patent ( monopoly ) to trade in West Africa and America was awarded . This charter should prevent any competition between the various trading venues.

Organization of the WIC, conquered territories

The WIC was organized on the model of the Dutch East India Company (VOC). It consisted of five chambers:

The company was led by Messrs. XIX (nineteen), a body that met alternately in Amsterdam and Middelburg .

The most notable achievement of the society was the establishment of the colony New Netherlands ( Nieuw Nederland ) in 1624 , including the city ​​of New Amsterdam ( Nieuw Amsterdam ), now New York, established in 1626 on the southern tip of Manna-hata . Other foundations are Breukelen, now Brooklyn , Hoboken , Connecticut , Delaware , New Jersey and Dutch Guiana on the north coast of South America . An attempt to snatch Brazil from the Portuguese failed after a 30-year war, see Dutch-Brazil . In West Africa, the company operated some fortified trade bases in what is now Ghana , for example Fort Batensteyn .

The colonization of New Netherlands did not get far. On the one hand because of the bitter rivalry with England , which conquered New Netherlands in 1664, and on the other hand because of difficulties in getting settlers enthusiastic about the colony. The company's policy was to guarantee the people who had brought settlers into the colony wide-ranging powers over them.

The founding treaty of the Dutch West Indian Society stipulated to work against a peace between the Netherlands and Spain. This was done for the business purpose of carrying out armed raids on Spanish silver fleets .

The "Second WIC" is founded

In 1671, the WIC's charter expired, but was provisionally renewed a few times. In 1674 the company was completely reorganized. The capital was brought back by a fifth of the original amount, to 1.2 million guilders, and Messrs. XIX were reduced to ten seats. The new charter ( Octrooi ) of 1674 was drastically changed. This only spoke of a trade monopoly on the coast of Africa and the possessions in Essequibo , Pomeroon (part of Dutch Guiana), Curaçao , Aruba and Bonaire . De facto the Tweede Geoctroyeerde West-Indische Compagnie mainly focused on the slave trade with Africa.

In the period from 1674 to 1740, 383 slave ships were on the move for the company. The organization of the slave journeys lay with various chambers of the WIC, which had designated special committees. The Atlantic triangular trade began in one of the Dutch ports with the African west coast as its first destination. Mainly the Dutch fortresses, Fort Elmina and Fort Accra were landing places here.

Precise demands were made on the quality of slaves . Slaves who were not blind or lame and who had no contagious diseases were considered acceptable and acceptable. It was also determined what age they had to be and what their market value was. Full-fledged slaves were 15–36 years old. If they were older than 36 years they were not considered profitable for transportation. Slaves 6 to 15 years old counted as three for the price of two - and two to 6 years old for the price of one. Under contract, two hundred guilders (roughly the annual wage of a worker) had to be paid for a slave. Sugar cane planters were given discounts. One third of the invoices had to be paid in sugar and should take place a fortnight after the purchased slaves were taken over. Of this, the sugar content was more important than the money, which could possibly also be paid later.

The largest slave ships were armed with fifteen to twenty cannons, had a crew of 45 to 60 people and transported around 500–600 slaves. The average travel time was 516 days (including stay in Africa, America and return to the republic). On the return voyage, the WIC ships took staple products such as sugar with them to the Netherlands, in order to then sail to West Africa, America and back again (hence also known as the "triangular voyage").

From 1668 onwards , Curaçao became the slave depot of the Caribbean through an Asiento of the WIC with the Portuguese middlemen Domingo Grillo and Ambrosio Lomelin . For religious reasons, Catholic Spain was not prepared to cooperate directly with the Dutch. When the WIC lost its trading monopoly in 1734, it had shipped around 220,000 slaves by then.

Prussia and the WIC

The Prussian King Friedrich Wilhelm I sold his African possessions to the company, including the Groß Friedrichsburg founded by Kurbrandenburg , in treaties of 1717 and 1720.

The "Second WIC" is canceled

As a result of declining income and financial problems, the company was finally abolished in May 1791.

The Dutch West India Company Archives contain original documents on the history of the WIC, as well as on the slave trade, warfare, diplomacy, plantation culture and everyday life in the regions where the WIC established colonies. In 2011, these archives for the countries of the Netherlands, Brazil, Ghana, the Netherlands Antilles, Suriname, Great Britain and the USA were added to the UNESCO list of World Document Heritage (Memory of the World) .