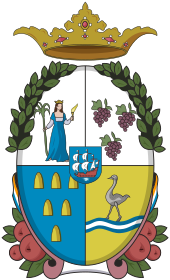 Coat of arms of Dutch Brazil

Dutch Brazil (also New Holland ) was a Dutch colony in northeastern Brazil from 1630 to 1654 . The area comprised parts of the country that had already been colonized by the Portuguese . 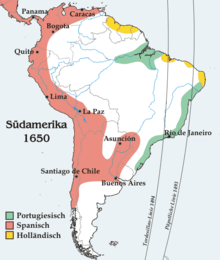 Division of South America between Spain, Portugal and the Dutch, circa 1650. The area of ​​New Holland is the eastern yellow stripe. At that time it was retaken by the Portuguese, but there is still no peace treaty

In 1621 that gave the States General of the Republic of the Seven United Netherlands of the West India Company (WIC) the right, in West Africa and America to trade. It was founded after the twelve-year armistice with Spain , during the Eighty Years' War . After the WIC's continued raids along the Brazilian coast, the Netherlands finally intervened with the aim of acquiring Brazil as a colony . The Dutch-Portuguese War , which was fought from 1624 to 1661, began .

As early as 1624 and 1627, smaller areas of Portuguese Brazil were briefly occupied. In 1630 the Dutch were more successful when they were able to conquer the province of Pernambuco with an expeditionary army under Hendrick Lonck . However, since large parts of Brazil remained in Portuguese hands, the conquered colony was constantly threatened.

In 1636 Johann Moritz , Prince of Nassau-Siegen , was appointed Governor General for the possessions of the trading company in Dutch Brazil. He founded Mauritsstad (now Recife ) as a center, introduced religious freedom , stimulated sugar cane production and had defenses built. Encouraged by the religious freedom granted, a large number of Amsterdam Jews decided to immigrate to the new colony.

When the Dutch destroyed almost the entire Portuguese-Spanish fleet off Itamaracá in 1640, the brutal war over Brazil flared up again. At the beginning of 1643 Moritz returned to the Netherlands. The Moritzschloss fortress at the mouth of the Rio São Francisco still commemorates him today in Brazil .

When Moritz was recalled by the management of the WIC, many Jews also decided to return to Amsterdam . Others moved to the Dutch colonies on the Rivers Pomeroon and Essequibo in what is now Guyana as planters .

By a decree of the Portuguese crown in 1649 was the General Society of Brazil trade ( port. : Companhia Geral do Comércio do Brasil ) was established to support the ongoing uprising since 1645 of Portuguese-speaking population in the Pernambuco region. The company, which united both state and private capital, pursued the main goal of building a convoy system in order to minimize the losses of merchant ships and the associated containment of the radius of action of Dutch squadrons and privateers .

In 1654 the Portuguese finally succeeded in wresting the area from the Dutch, weakened by the First Anglo-Dutch Sea War , and reintegrating it into their colony. However, Portuguese rule was not recognized and after the peace treaty with England was signed in May 1654, the republic demanded the return of Dutch Brazil. In 1656 an open war broke out with Portugal, which led to a blockade of the Portuguese west coast. On August 6, 1661, a peace treaty was signed in The Hague (ratified in Portugal on May 24, 1662). Portugal accepted the losses in Asia and paid four million cruzados (eight million Dutch guilders ), partly in cash and partly in the form of natural produce (sugar, tobacco and salt) as compensation for Brazil, which the republic finally renounced.

The Jews who remained in Brazil had three months to leave the Portuguese colony .

Territories and former colonies of the Netherlands