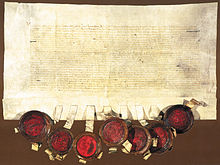 In diplomacy , the charter is distinguished from the notitia as an early medieval document form : the charter is a dispositive document that is formulated in the first person and in the present tense, while the notitia is formulated as a document of evidence in the third person and in the perfect tense. The charter was in use in the early and high Middle Ages, especially in southern Europe (Italy, Spain, southern France).

In a figurative sense, the term is also used for statutes or voluntary commitments of non - governmental organizations . So there are z. B. Charters from artist groups, scientists or professional groups.

other charters in the category: Charter