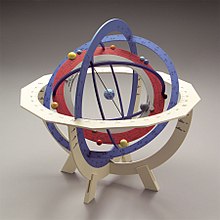 An armillary sphere (lat. Armilla "bracelet", sphaera "ball") or z. Sometimes also called the world machine , it is an astronomical device. It is used to represent the movement of celestial bodies . An armillary sphere consists of several metal rings which can be rotated against each other and which together form a sphere. This structure is usually mounted in a frame.

The imaginary observer is in the center of the sphere. If the device shows the geocentric view of the world , the earth is located there in the center of the armillary sphere . Such armillary spheres have already been proven in primitive versions for ancient Babylonia . The Copernican view of the world is represented in the Sphaera Copernicana created by Andreas Bösch in 1657 .

The Armille is an astronomical angle measuring instrument with a reticle similar to the armillary sphere, with which coordinates on the celestial sphere were determined and converted. It was also good for location and time measurement. It was introduced by Eratosthenes under the name Astrolabe . Ptolemy describes in chapter 5.1 of his main work Almagest the construction of an armillary sphere. The instrument remained in use mainly in the Islamic world throughout the Middle Ages . In Central Europe it was not known again until the middle of the 15th century by the Frankish astronomer Regiomontanus and reached its perfection at the end of the 16th century with the Danish astronomer Tycho Brahe , who also devised the device that it replaced as a precise position measuring instrument: the wall quadrant .

After the introduction of the telescope into astronomy by Galileo Galilei at the beginning of the 17th century , the armillary sphere as an observation instrument faded into the background, as it was difficult to fit a telescope due to its design, unlike a quadrant , which is essential for this is more suitable. In the centuries that followed, the armillary sphere became an object of artistic expression and a pure symbol of astronomy. For example, an armillary sphere is depicted on the Portuguese national flag as a symbol of Portugal's great affinity with seafaring .

Using an armillary sphere, three geocentric astronomical coordinate systems can be visualized at the same time : 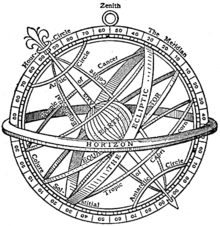 The sky above the horizon is visible, the areas below are covered by the surface of the earth. All other rings of the armillary sphere form the celestial vault. They are connected to the north-south axis of rotation of the earth and can be rotated relative to the horizon and meridian. If the celestial vault were designed as a spherical shell, the stars could be applied from outside, but would not have access to the interior of the sphere. For this reason, the armillary sphere is limited to the indication of the tropics of important constellations. The ecliptic describes the course of the sun with its inclination of 23 ° to the celestial equator.

In many models, the sun is placed as a small ball on the ecliptic disk. One turn of the sky makes the sun rise and set over the horizon. The duration of twilight and the maximum position of the sun depend on where the sun is on the ecliptic. For example, if it is located at the outer edge of the ecliptic in the top right-hand corner, the armillary sphere shows its maximum in June at noon. On the other hand, if it is at the bottom right of the ecliptic, it is midnight in December. If the sky turns 180 °, the winter sun rises only a little over the horizon at noon.

In addition to the sun, the moon is often given its own disk. It is offset by about 5 ° from the ecliptic, with movable lunar nodes. The other planets find their place on the ecliptic without too great a mistake.