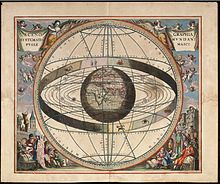 Representation of the Ptolemaic world system (1661)

Almagest ( ancient Greek μαθηματική σύνταξις , Arabic المجسطي, DMG al-maǧisṭī ) is the name of one of the main works of ancient astronomy that goes back to the Hellenistic-Greek scholar Claudius Ptolemy .

The most comprehensive and competent representation of the astronomical system of the Greeks was handed down by Claudius Ptolemy with his textbook Mathematike Syntaxis ("Mathematical Compilation" from μαθηματικός = belonging to learning, eager to learn), which was created around the middle of the 2nd century . Later copies of the highly regarded work were titled Megiste Syntaxis ("Greatest Compilation"), which was adopted as al-madschisti in the Arabic translations and from there as Almagest in the Latin translations and current usage. In contrast to other works of that time, the text of the Almagest has survived in its entirety.

The Almagest is based on the geocentric Ptolemaic worldview and works out its astronomical details. In contrast to Ptolemy's work Hypotheseis ton planomenon ("Hypotheses about the planets"), which is more physically influenced , the Almagest focuses on the mathematical description of the orbits of the individual celestial bodies. Because of its exact mathematical modeling of the celestial movements and the possibility of calculating them very precisely in advance, it developed into the standard work of mathematical astronomy from the 2nd to the 17th century.

The Almagest ousted all other Greek astronomical writings very early because of its qualities. Ptolemy systematized all ancient knowledge about celestial objects in it, using the high level of Greek mathematics and embedding his system in Aristotelian physics. Today the work is regarded as the climax and conclusion of ancient astronomy.

In addition to the work itself, there are also ancient commentaries on it, in particular by Pappos and Theon of Alexandria .

The content and structure of the Almagest became the model for all astronomical manuals for more than 1500 years . Like Euclid's Elements , the Almagest also consists of 13 books:

As a "preliminary discussion" Ptolemy sets out some principles:

The simple ideas of spheres and circles, however, were not in line with the observational data. Two difficulties were evident:

There have been various models to explain these phenomena . In his work Ptolemy adopted the epicyclic theory of Apollonios von Perge with its epicycles and deferents, since this theory had the advantage over the older spherical shell model of Eudoxus von Knidos that it could be expanded ( higher order epicycles ). From Hipparchus of Nicea , however, the idea of a native eccentric position of the deferent ( Exzentertheorie ) . Because of the uneven speed, Ptolemy also needed a compensation point, the so-called equant : from this point the movement of the planet then again appeared uniform.

The sun theory of Hipparchus was adopted by Ptolemy unchanged, but he was of the opinion that his lunar theory should be represented more precisely because of the more complex moon movement. Thanks to the very precise data of the lunar movements handed down by that very Hipparchus, Ptolemy determined values ​​in his lunar theory that could only be noticeably improved by Tycho Brahe .

The Almagest contains, among other things, a systematic summary of the art of measuring distances from the measurement of angles and distances ( triangulation ). Trigonometry (triangular measurement) later developed from this . In book 1 you can find the famous tendon table , a forerunner of our trigonometric tables , from ½ ° to 180 ° in ½ ° steps (this essentially corresponds to the sine table from ¼ ° to 90 ° in ¼ ° steps). Further theorems of plane and spherical trigonometry follow .

The Almagest also contains a catalog of celestial objects . This inventory consists of the information on 1025 stars in 48 constellations . For the next 15 centuries, this catalog was also considered to be the style-defining structure, the technical terms and the coordinates of all of its successors.

With the epicyclic model, the planetary movements could be calculated very reliably within the framework of the measurement accuracy at the time, but at the price of contradictions to the fundamentals of Aristotelian physics : the movement of the planets no longer took place around the center of the world (due to the eccentric position of the defendant) and the uniformity the planetary motions could only be guaranteed by mathematical tricks. That is why people spoke very early about the salvation of phenomena . This meant that astronomy should be seen as a branch of geometry rather than a branch of physics. It is only responsible for the exact mathematical representation of the celestial movements.

The American astrophysicist Robert Russell Newton made a fundamental criticism of the Almagest in the 1970s - namely that the stated observation data were derived from calculations and were thus falsified as observation data .

The oldest surviving Greek manuscripts of the Almagest are the Paris Codex 2389 in the National Library (possibly originally brought from the Laurentiana in Florence and brought to France by Catherine de Medici) and the Codex Vaticanus Graecus 1594, both from the 9th century. The Vatican Codex is the finest surviving copy and was used by Heiberg for its edition. There are also codices from the 10th century (Codex Venice 313) and 11th century (Laurentiana, Pluteus 89,48). In 1915, Peters and Knobel enumerated a total of 21 Greek, 8 Latin and 25 Arabic codices (their list, however, is incomplete). Outstanding among the Arabic manuscripts is the British Museum, Reg. 16, A. VIII (15th / 16th century, by Nasīr ad-Dīn at-Tūsī , formerly owned by the Turkish Sultan). The earliest surviving Arabic translation (Baghdad 827) by al-Hajjaj ibn Yusuf ibn Matar and the Byzantine Elias is preserved in a codex in Leiden (Codex Leidensis 399).

In the 9th century, many Greek scripts became known to the Arabs, including the Almagest . This has now been translated and commented on several times. So it developed into the basis of astronomical observation and calculation in the Arab world. An early translation (late 8th century) into Syrian and the first Arabic translation have been lost. The earliest surviving Arabic version comes from al-Hajjaj ibn Yusuf ibn Matar. We owe the best translation (from around 879 to 890) to Ishaq ibn Hunayn , the son of the master translator Hunain ibn Ishāq ; it was revised by Thabit ibn Qurra . The manuscripts of both editions have survived to this day and were also brought to Muslim Spain in the Middle Ages.

Since there was hardly any access to ancient Greek sources in western Europe during the early Middle Ages , the Almagest was also unknown here. Although astronomy was part of the Quadrivium , knowledge in this area was rather limited. However, that changed with the increasing interest in astrology, because precise data from astronomy were required for this. In the second half of the 12th century, several astronomical works finally became accessible, including the Almagest in addition to that of Thabit ibn Qurra and Abu Ma (schar al-Balchi ( Albumasar ) . This was translated from Arabic into Latin by Gerhard von Cremona and was the edition mainly used in the Latin Middle Ages. Gerhard initially worked with the Hajjaj version, in the course of the work he got his hands on the Hunain-Thabit translation, whereupon he not only changed the template, but also revised the chapters that had already been translated using this more precise version. Gerhard's translation, like all of his translations, is extremely literal.

From the middle of the 13th century, the Almagest had strong competition in astronomical lectures at universities from the Theorica planetarum (" planetary theory "), an anonymous treatise that was probably written by a teacher at Paris University . The planetary theory described the Ptolemaic basic theory for each planet and supplemented this description by more drawings.

In 1451, the Greek scholar Georg von Trebizond made a translation into Latin from Greek sources (printed in Venice in 1528 by Giunti), which was criticized as inadequate, among other things. a. by Cardinal Bessarion . There was already a translation directly from the Greek by an anonymous translator in Sicily in the 12th century, but it was hardly distributed (four or parts of her manuscripts have survived). There is also an incomplete manuscript of a translation from Arabic into Latin from the early 12th century in the Crusader state of Antioch. The astronomers Georg von Peuerbach and then Regiomontanus worked on better translations, but died early. A summary of Regiomontan, the "Epitom", was only printed twenty years after his death, in 1496 as "Epytoma Ioa [n] nis de Mo [n] te Regio in Almagestu [m] Ptolomei". This work, dedicated to Bessarion, was one of the most important foundations of astronomy for two decades, and Copernicus was one of the owners of a copy. A complete Latin version of the Almagest did not appear in Venice until 1515 (with Petrus Lichtenstein in the translation from the Arabic by Gerhard von Cremona). The first Greek original version was printed in Basel in 1538 (at Joh. Walder), which Simon Grynaeus and Joachim Camerarius the Elder made from a manuscript that was formerly in the possession of Regiomontanus and was later lost. In Basel in 1543 the Latin works by Regiomontanus and Peuerbach on the Almagest, “Ioannis de Monte Regio et Georgii Purbachii Epitome in Cl. Ptolomaei magnam compositionem… “. In the same year the work “De Revolutionibus” by Nicolaus Copernicus was published in Nuremberg , which was based on the Almagest and led to the fact that the geocentric worldview presented in the Almagest was replaced by the Copernican heliocentric one . The greatest advocates of the new worldview were more than half a century later Galileo Galilei and Johannes Kepler . The Kepler's laws then ushered in the development of modern astronomy. Erasmus Reinhold, for example, published the Almagest in 1549 as a Greek-Latin comparison, and in 1551 his Prutenic tables with data from Copernicus.

Since there is a great need for research into the medieval Arabic and Latin tradition of the Almagest and other writings by Ptolemy, this became the subject of a project by the Bavarian Academy of Sciences (Ptolemaeus Arabus et Latinus).