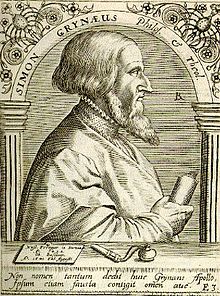 Simon Griner was born in Swabia in 1493 as the son of the farmer Thomas Grüner and attended the Latin school in Pforzheim with the teachers Nikolaus Gerbel and Georg Simler . A lifelong friendship with Philipp Melanchthon began here . Another classmate was the later Bern reformer Berchtold Haller . On October 13, 1511, Grynaeus enrolled at the University of Vienna , where he did his master's degree . He also became acquainted with the humanist Joachim Vadian . Then he was the head of a Latin school in Buda , where there were a large number of German settlers. Expelled by the conservative clergy, Grynaeus went to Wittenberg , where he was enrolled in April 1523. In Wittenberg he converted to Protestantism.

Career as a university lecturer and reformer

Epitaph in the cloister of the Basel Minster for Jakob Meyer zum Hasen , Johannes Oekolampad and Simon Grynaeus

In 1524 Grynaeus was appointed professor of Greek at the University of Heidelberg , where his Reformation attitude was not shared, but his knowledge was urgently needed. When Hermann von dem Busche left his Latin professorship, Grynaeus was asked to take on this too. In Heidelberg , Grynaeus moved away from Martin Luther's view of the Eucharist and approached Ulrich Zwingli's position - influenced, among other things, by a meeting with Andreas Bodenstein in 1524. In Heidelberg, he also studied mathematics, astronomy and music.

In 1525 he disputed with Johannes Brenz about his new positions. During the Diet of 1529 he visited Speyer and renewed his friendship with Melanchthon. At the same time he clashed with Johann Fabri . In 1529 he was brought to the university as a Greek professor by the Basel city ​​council, which was influenced by Johannes Oekolampad and the mayor Jakob Meyer zum Hirzen in Grynaeus' favor (later he also taught theology). Since the mid-twenties he had gained a reputation not only as a lecturer, but also in humanist circles through successful searches for old manuscripts. He worked with the publishers Johann Froben and Johannes Bebel , was supported in his editing work by the humanist Erasmus von Rotterdam , and in 1531 traveled to England in search of manuscripts, where he also met Thomas More and other humanists.

Shortly before July 25, 1531, after the "religious conversation " with the Baptist Hans Pfyster Meyer on July 13, 1531 in Bern , Grynaeus returned to Basel and began to deal with the logical and scientific writings of Aristotle with his students. Shortly before his death, he gave a lecture on Aristotle's Organon. In 1534 Grynaeus left Basel with the approval of the city council, which had been asked by Duke Ulrich von Württemberg and Ambrosius Blarer so that he could take care of the reform of the University of Tübingen. On July 13, 1535 he returned to Basel.

The invitation from Grynaeus and Blarer to Württemberg shows Duke Ulrich's efforts to keep Zwinglians and Lutherans alike in the country. Grynaeus was quickly confronted in Tübingen with a controversy about the Lord's Supper , which he sought to resolve in the style of Irenik and in dialogue between Lutherans, Zwinglians and Strasbourgers, following the example of the Strasbourg reformer Martin Bucer . After a colloquium in Tübingen on May 28, 1535, a compromise was reached on the basis of Luther's petition in Marburg, which Zwingli had rejected. But the Lutheran party was bigger, so that gradually all of Württemberg became Lutheran. As in Württemberg, Grynaeus was also keen to unite the Protestant churches in Switzerland. He worked out (presumably with Myconius) using preliminary work by Oekolampad, the First Basel Denomination of 1534, which was in force in Basel until 1871. He was also a co-author of the Second Basel Denomination of 1536 and the Confessio Helvetica Prior .

After his return from Tübingen he made a name for himself more and more as the spiritual leader of the Basel Church (Oekolampad died in 1531), as Myconius consulted him more and more often. In 1536/37 he was Dean of the Philosophical Faculty. During the Bern Synod of 1537, Grynaeus defended the Strasbourg position against attacks by the Lutherans and renewed his personal relationship with John Calvin , whom he helped prepare for his return to Geneva in 1541. Calvin then dedicates his letter to the Romans of 1539 to Grynaeus. Relations between Old Believers and Protestants were also close to his heart. He represented Basel at the Worms Religious Discussion (1541) , where his skill further enhanced his reputation.

In Basel, Grynaeus supported Oswald Myconius in his disputes with the city council and the university, which demanded that the clergy have academic degrees. Grynaeus propagated the freedom of the pastors from the authorities, which is the first time that his opinion was against his friend Bonifacius Amerbach . In the end, the position of the council and the university triumphed - but the conflict kept boiling up. Perhaps Grynaeus' election as rector of Basel University on May 1, 1541 was a sign of reconciliation on the part of the council and the university. However, three months after his election as rector, he died of the plague that had affected his family as early as 1539 (his wife was recovering from the disease, two members of his household died).

Grynaeus was married twice. He married his first wife, who came from Speyer, in Heidelberg. In his second marriage, after her death in Basel in 1538, he married the rich widow Katherine Lompart. They had a son Samuel Grynaeus (1539–1599), who also became a professor in Basel.

Relationship to Erasmus and activity in England

Since his stay in England, Grynaeus' relationship with Erasmus had suffered greatly. Grynaeus, in view of the health and age of Archbishop of Canterbury William Warham, requested a one-off payment instead of the annual payments to Erasmus, and when he made the successes he had achieved in agreement with Erasmus his own from Erasmus's point of view, angered the Erasmus. Grynaeus did not seem to have behaved particularly tactfully in England, especially in theological questions, because after Erasmus's public criticism, his English host Thomas More also criticized his behavior. Grynaeus' inability to deal with complex issues with tact and caution is mentioned elsewhere by his friend Martin Bucer .

During his reception with Henry VIII , Simon Grynaeus was asked to seek Protestant positions on the matter of Henry's divorce from Catherine of Aragon , which was also a politically explosive matter. In August 1531, Grynaeus sent a first shipment of letters to London containing the positions of Oekolampad, Paul Phrygio , Wolfgang Capito , Zwingli and Bucer, all of whom more or less moderately supported the king's concerns. In October he sent in the positions of Melanchthon and Luther, which were not so positive.

Why exactly Erasmus was suddenly so hostile to Grynaeus is unclear, but it does not seem to have anything to do with Henry VIII's divorce affair. Nevertheless, it may be that Grynaeus was present when Erasmus died in Froben's house in Basel in 1536. Letters from the Strasbourg reformers Martin Bucer and Wolfgang Capito to Luther indicate this.

In 1526 he entrusted some of the materials he had found to Sebastian Münster , who used them to support Froben's publication of Elias Levita's “Hebrew Grammar”.

Simon Grynaeus caused a sensation, especially in the vicinity of the Froben printing works, when he rediscovered five of Titus Livius' books ( Ab urbe condita ) in the library of Lorsch Abbey in September 1526 and sent them to Froben in September 1526, who included them in his Livy edition of 1531 . Grynaeus began his work in Basel with a lecture on Aristotle 's rhetoric, at the same time he tried to explain the New Testament .

Erasmus of Rotterdam supported him as much as he could, although they differed on theological questions. Grynaeus translated Erasmus some Chrysostom - homilies on the first letter to the Corinthians and helped the Frobendruckerei when released, so that the output in 1530 could go to press. Erasmus wrote a foreword for Grynaeus' Greek Aristotle edition (printed in May 1531 by Johannes Bebel).

In 1531 Grynaeus went on a trip to England with the publisher Bebel to track down old manuscripts and prepare them for printing. With the forewords and dedications to Charles Blount in Livius and John More in Aristotle von Bebel, as well as letters of recommendation from Erasmus, the two were well prepared for the trip. They visited friends of Erasmus in Cologne , Antwerp , Gent , Calais and London . On June 6, 1531, Grynaeus met Henry VIII in London ; He also made contacts with Reginald Pole , Thomas Cranmer , Thomas More and John Claymond, the director of Corpus Christi College in Oxford. This allowed Grynaeus to take a number of manuscripts to Basel in order to publish them there, mainly by Proclus. In 1531 he published Proklos's writings at Bebel and dedicated them to John Clement.

For his Greek editions of the Elements of Euclid (the Editio Princeps of the Greek text) he used two manuscripts. One from Venice , which the French ambassador there Lazare de Baïf had made available to him (today's Codex Marcianus 301), and a codex from Paris from the 16th century, which the doctor and humanist Jean Ruel made available to him (Codex Paris gr. 2343). He had the commentary on the elements of Proclus from Claymond of Oxford. Grynaeus had the work printed by Jakob Herwegens in 1533; he dedicated it to Cuthbert Tunstall (1474–1559), a mathematician and lawyer who would later become Bishop of London and Durham. In 1534 a Latin translation of Bebel's Plutarchedition followed, with a dedication to Cranmer.

Grynaeus has considered dedicating Froben's Latin Plato (1532), for which he had revised Ficino's translation, to Thomas More. In 1534 he finally dedicated Johannes Walder's Greek Plato to John More , the son of Thomas More, although Thomas More was no longer Chancellor by then. These and other editions initiated and prepared by Grynaeus, such as Johannes Huttich's collection of sources on the discovery of the New World “Novus orbis regionum et insularum” (1532), printed by Herwagen, show that Grynaeus “posterasmian” publication tendencies in Basel towards more scientific and scientific methods emphasizing publications, similar to Melanchthon in Wittenberg.