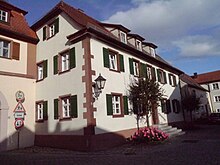 Since the Middle Ages, a Latin school has been called a school that - unlike the Winkelschule or German school - prepared its students for a spiritual profession or later study at a university and primarily taught Latin . Latin was the main subject and partly also the language of instruction. It often existed at an episcopal church or a municipal parish church. After the secularization of the church property through the Reformation , it was also able to exist as a princely school or a municipal school for scholars , where the lower three of the seven liberal arts were taught - this meant the trivium of grammar, rhetoric and dialectics. These schools were often given names such as scholarly school, grammar school , lyceum , pedagogy or seminar. Latin schools were then used to refer to the lower levels of grammar school, which were often dislocated and prepared for grammar school. In modern Latin schools, the focus was on learning the Latin language and reading it , while in grammar school translating into Latin was the focus.

In the course of the 19th century it was replaced by the Humanist Gymnasium ; it is thus the forerunner of today's old language grammar school . 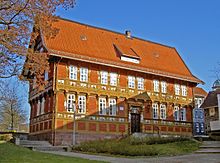 Latin school is u. a. For