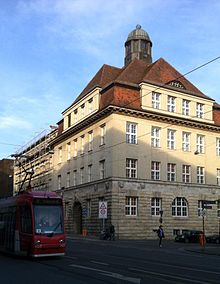 The Melanchthon Gymnasium, founded in Nuremberg in 1526, is one of the oldest humanistic gymnasiums in the German-speaking area.

The humanistic grammar school derives its name from the educational idea of the new humanistic educational reformers around Wilhelm von Humboldt in the course of the Prussian reforms . In Bavaria , Friedrich Immanuel Niethammer developed similar reform concepts, in Austria the university professor for ancient languages Hermann Bonitz and the philosopher Franz Serafin Exner initiated a corresponding educational reform in 1848/1849 . The ancient languages Latin and Greek dominated the lesson table as “humaniora” , alongside mathematics and “historical” subjects, German with only two to three hours per week. There was also a little French and physics / natural history . In public opinion, graduates of the humanistic grammar school have long been part of the educational elite .

In Prussia, only the humanistic grammar school led to an Abitur until 1900 , which entitles graduates to all fields of study , while the Abitur at Realgymnasien (modern language, partly with Latin) and Oberrealschulen ( mathematical - scientific ) only granted restricted access. The criticism of this came from two directions, the representatives of the technical and natural sciences as well as the advocates of a stronger patriotic education. Until the December conference in 1890 there was long controversy about sticking to the Latin essay, for which translation into Latin and exercises in style were necessary.

In the humanistic grammar schools of the 20th century, the number of ancient languages ​​was noticeably reduced (by a quarter as early as 1890/1892, especially in favor of German), but the high reputation of this elitist orientation remained, even if its share decreased . Shortly before the Second World War , only about twelve percent of all high schools were humanistic.

Federal Republic of Germany until 1990

After the end of the war in 1945, the humanistic grammar schools in West Germany experienced a new boom, among other things to counter the National Socialist educational ideology. For example, ancient language branches were set up at grammar schools , offering English as a second or even first foreign language, but Latin and ancient Greek as the first to third foreign language. Nevertheless, the subject of Ancient Greek soon had to show a sharp decline. Since the reform of the upper school in 1972, the pupils were largely able to choose their subjects themselves after the 10th grade, which caused the old languages ​​to suffer greatly.

Contrary to the situation in West Germany, the humanistic grammar school had no place in the socialist educational system of the GDR . The term “humanistic” was used for an all-round education of all people, that is, also literarily oriented, but without reference to ancient languages. Of course there were also Latin classes. Alternatively, there was the Ecclesiastical Proseminar Naumburg (Saale) , the Ecclesiastical Oberseminar Potsdam-Hermannswerder and the Norbertinum Magdeburg , where an old-language-humanistic Abitur could be taken.

Although the conventional grammar school types have been obsolete since the reform of the upper level (from 1972) , the term “humanistic” is used for grammar schools that offer a fifth grade with Latin lessons and ancient Greek as a third foreign language. In this context, there is also talk of the “old-language grammar school”.

In 2014, the press reported on the trend of declining student numbers.

“Humanistic” is often understood to mean an expanded understanding of education in which general education is relevant to personality and in which experiences, insights and values ​​are incorporated.

The grammar school on Münsterplatz in Basel was built in 1589 from the former church Latin school of the 11th century. It is the oldest grammar school in the city of Basel. From 1930 to 1997 it was called the Humanistic Gymnasium (HG) and is still committed to the humanistic tradition today:

In addition to the focus subject Philosophy, Education and Psychology (PPP), the school offers the language focus subjects Latin, Greek, Spanish and now also English (only in combination with the International Baccalaureate Program).