Apollonios von Perge (Latin: Apollonius Pergaeus ; * approx. 265 BC in Perge ; † approx. 190 BC in Alexandria ) was an ancient Greek mathematician , known for his book on conic sections . In astronomy, he contributed to the theory of moon and planetary motion, which Ptolemy later adopted in his textbook.

Little is known about the life of Apollonios and the exact time of life is also discussed in research. Apollonios studied and worked most of the time in Alexandria , especially under Ptolemy III. and Ptolemy IV. He apparently also lived at some point in Pergamon , where a large library was located like in Alexandria. In the first book of his Konika he mentions the time he spent together with Eudemus in Pergamon, to whom he dedicated the first three books of his writing. In the Proöm to the second book of the Konika he mentions a son of the same name and the Epicurean Philonides , with whom he was familiar.

The moon crater Apollonius is named after him.

In his most important work Konika (" About Kegelschnitte ") he devoted himself to in-depth investigations into conic sections , limit value determinations and minimum-maximum problems . The first three books are dedicated to the mathematician Eudemus, the others to an Attalus, who is probably not identical with the king. He proved that the four different conic sections ( ellipse , circle, parabola and hyperbola ), whose names and definitions he introduced, come from the same general cone type. After Zeuthen he was already familiar with the concept of the coordinate. The circle of Apollonios , the Apollonian problem and the Apollonios theorem are named after Apollonios von Perge .

In astronomy , Apollonios contributed to the epicyclic theory and showed its connection to the eccentric theory. He explained the retrograde motion of the planets and the irregular motion of the moon. His method of calculating the " midpoint equation " was taken up and further developed by Hipparchus and Claudius Ptolemy , among others . He is also said to have developed an improved sundial with hour lines on conic sections. 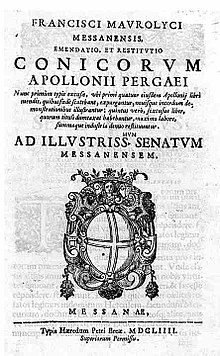 Books V to VIII of the conic sections were long considered lost (and various mathematicians of the 17th century tried to reconstruct them, such as Franciscus Maurolicus ), until an Arabic manuscript (translation by Thabit ibn Qurra ) was found in the Biblioteca Medicea Laurenziana in Florence found books V to VII, believed to be lost, published as a translation by Giovanni Alfonso Borelli and Abraham Ecchellensis in Florence in 1661. Book VIII is considered lost.

The conical sections formed by the intersection of a plane with a cone at different angles. The theory of these figures was developed extensively by the ancient Greek mathematicians who survived primarily in works such as Apollonius von Perga.

Books 1 to 4 deal with the elementary theory of conic sections as an introduction, and most of the material was already known to Euclid (as Apollonios himself writes), but Book 3 also contains new results. There seem to have been previous versions of books 1 and 2, which Apollonios circulated, on which some of the traditional manuscripts are based. Books 5 to 7 contain completely new, otherwise unknown, original material by Apollonios, for example on normals to conic sections in book 5, which anticipate the later construction of the evolute to conic sections. In the representation, Apollonios follows the style of Euclid's elements.

Pappos of Alexandria mentions the titles of other works by Apollonios. Only excerpts from Pappos, Proklos and others have survived, apart from an Arabic manuscript from De Rationis Sectione from the 10th century (further Arabic manuscripts are said to have existed after Ibn al-Nadim , but have not survived). Pappos also mentions De spatii sectione (section of a surface), De sectione determinata , De Tactionibus (about touches, Apollonian problem ), De Inclinationibus (inclinations), De locis planis (level places), each in two books. Claudius Ptolemy handed down two theorems from a lost astronomical book by Apollonios.

Other books by Apollonios are only known by title: Hypsikles mentions a work in which Apollonios compares the dodecahedron and icosahedron inscribed on a sphere , Marinos mentions in a Euclid commentary a general work by Apollonios on the fundamentals of mathematics (meaning of axioms, definitions ua), after Proklos he wrote a book about irrational numbers and about the helix on a cylinder. He is also said to have written a book about burning mirrors and, according to Eutokios, gave a better approximation than Archimedes in a book .

A commentary on the first four books of conics comes from Eutokios.