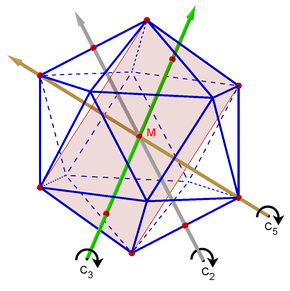 Because of its high symmetry - all corners , edges and surfaces are similar to each other - the icosahedron is a regular polyhedron . It has:

The following Cartesian coordinates define the corners of an icosahedron with edge length a = 2, centered at the origin:

Soccer ball - a truncated icosahedron with pentagons and hexagons

The dodecahedron is the dual polyhedron to the icosahedron and vice versa.

With the help of icosahedron and dodecahedron , numerous bodies can be constructed that also have the icosahedron group as a symmetry group . So you get for example

The structure of the icosahedron

Rectangles in an icosahedron

As the figure on the right shows, you can select 3 pairs of opposite edges from the edges of the icosahedron so that these pairs span 3 congruent rectangles that are orthogonal to each other . The lengths of the sides of these rectangles correspond to the golden ratio because they are sides or diagonals of regular pentagons . The icosahedron can therefore be inscribed in a cube in such a way that these 6 edges lie in the 6 faces of the cube and are parallel to the edges of the cube.

The 24 remaining edges delimit 8 triangles that lie in the surfaces of an octahedron - circumscribed by the icosahedron , with the corners of the icosahedron lying on its edges.

There are a total of five such positions, each edge of the icosahedron belonging to exactly one such group of orthogonal edge pairs, while each surface lies twice in the surface of a circumscribed octahedron . The symmetry group of the icosahedron causes all 5! / 2 = 60 even permutations of these five positions.

The edges of the icosahedron contain twelve flat pentagons , each edge belonging to two and every corner belonging to five of these pentagons. You can use this property to build a wireframe model.

The icosahedron can also be thought of as a combination of a uniformed pentagonal antiprism and a five-sided pyramid on each side .

Calculation of the regular icosahedron

therein is the base area (equilateral triangle)

it follows with inserted variables for the volume of the icosahedron

For the surface area of the icosahedron (twenty equilateral triangles) applies

This angle, marked with (see picture in formulas ), has its apex at one edge of the icosahedron. It can be determined using the following right triangle.

This angle, marked with , has its apex at one corner of the icosahedron.

Is, as in the illustration (see picture in formulas ), the angle z. B. searched at the corner , then it can be determined with the help of the right triangles and . Their common hypotenuse , equal to the radius of the sphere , divides the angle into the angles that are not shown, or so applies

The legs of the right-angled triangle with an angle are :, equal to the radius of the sphere , as a large leg and , equal to two thirds of the side height of the icosahedral triangle, as a small leg. This value is determined by the position of the center of gravity of the equilateral triangular area, since the geometric center of gravity divides the height of the triangle in a ratio of 2: 1.

The legs of the right-angled triangle with angle are :, equal to the edge ball radius , as a large leg and , equal to half the side , as a small leg.

The following applies to angles of the triangle

for angles of the triangle applies

the addition theorem for the arc function gives the angle

after inserting the relevant values ​​( ) applies

This angle, marked with (see picture in formulas ), has its apex at a corner of the icosahedron and corresponds to the interior angle of the regular pentagon .

Thus applies to the 3D edge angle of the icosahedron

Significance of the icosahedral group in mathematics

Significance of the icosahedron in cluster physics

The icosahedral shape is very important for clusters (accumulations of atoms in the order of 3 to 50,000 atoms) from a size of more than 7 atoms. The reason for this is Friedel's rule, which says that the structure has the lowest energy for which the number of closest-neighbor bonds is maximum. In many free clusters this occurs from 7 atoms, although there are exceptions and other structures are preferred (e.g. cubes).

The cluster numbers can be calculated using the following formula: 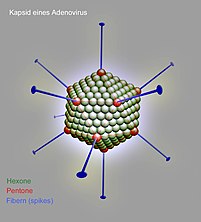 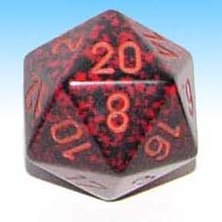 An icosahedron as a dice

Networks of the icosahedron

The icosahedron has 43380 networks . This means that there are 43380 possibilities to unfold a hollow icosahedron by cutting open 11 edges and spreading it out in the plane . The other 19 edges connect the 20 equilateral triangles of the mesh. In order to color an icosahedron so that no neighboring faces are the same color, you need at least 3 colors.

Animation of an icosahedron network

Coloring illustrated by the
icosahedron inscribed by the dual dodecahedron

The icosahedron has an undirected planar graph with 12 nodes , 30 edges and 20 areas assigned to it, which is 5- regular , ie 5 edges start from each node, so that the degree is equal to 5 for all nodes. In the case of planar graphs, the exact geometric arrangement of the nodes is not important. However, it is important that the edges do not have to intersect. The nodes of this icosahedron graph correspond to the corners of the icosahedron.

Node coloring of the icosahedral graph 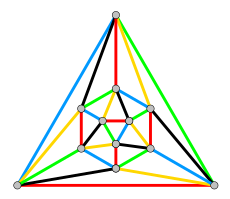 Edge coloring of the icosahedral graph

The dual graph (dodecahedron graph ) with 20 nodes , 30 edges and 12 areas is helpful to determine the required number of colors for the surfaces or areas . The nodes of this graph are assigned one-to-one (bijective) to the areas of the icosahedral graph and vice versa (see bijective function and figure above). The nodes of the dodecahedron graph can be colored with 3 colors so that neighboring nodes are always colored differently, but not with 2 colors, so that the chromatic number of the icosahedral graph is 3. From this one can indirectly conclude: Because the chromatic number is equal to 3, 3 colors are necessary for such a surface coloring of the icosahedron or a coloring of the areas of the icosahedron graph.

The 11 cut edges of each network (see above) together with the corners ( nodes ) form a spanning tree of the icosahedral graph . Each net corresponds exactly to a spanning tree and vice versa, so that there is a one-to-one ( bijective ) assignment between nets and spanning trees. If you consider an icosahedron network without the outer area as a graph, you get a dual graph with a tree with 20 nodes and 19 edges and the maximum node degree 5. Each area of ​​the icosahedron is assigned to a node of the tree. Not every graph-theoretical constellation (see isomorphism of graphs ) of such trees occurs, but some occur several times.

The icosahedral graph has 2560 Hamilton circles , but no Euler circles .

Icosahedral graph with one of the 2560 Hamilton circles