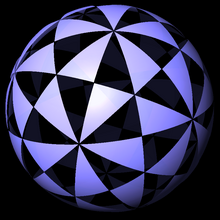 The subgroup that is too isomorphic, the icosahedron rotation group, consists of the orientation-maintaining symmetries of motion of the icosahedron (rotations). You can use this rotating group z. B. can be realized as a group of even permutations of the five cubes inscribed in a regular dodecahedron. is the smallest simple non-commutative group and has order 60.

The icosahedral group contains five-fold rotations and is therefore incompatible with long-range crystalline order ( see space group ). Quasicrystals , on the other hand, often have icosahedral symmetry.

The character table of the icosahedron group contains the golden ratio and related numbers, which is a direct consequence of the fivefold rotational symmetry.

Since the soccer ball is derived from a truncated icosahedron , it also has the icosahedron group as a symmetry group, as does the “soccer molecule” C 60 (buckyball).

The icosahedron group has diverse applications in mathematics, which are presented in Felix Klein's classical work, lectures on the icosahedron and the solution of the equations of the fifth degree . According to Galois theory, the general equation of the fifth degree has no solution in radicals, since it is not solvable (it is a finite simple group ).

In crystallography , the rotation group of the icosahedron is designated with the Schoenfliess symbol and the complete symmetry group with .