Planar drawing of the

In graph theory, a planar or flattenable graph is a graph that can be represented on a plane, with points for the nodes and lines for the edges , so that no edges intersect.

A graph is called planar or flattenable if it is embedded in the plane ; that is, it can be drawn in the plane so that its edges are represented by Jordan curves which only intersect at common end points. The embedding (also drawing ) of the graph is a plane graph . According to Wagner and Fáry's theorem, there is also an embedding for every planar graph in which its edges are represented as segments.

The embedding divides the plane into contiguous areas or areas that are bounded by the edges of the graph. The bounding edges of an area form its border. The unconstrained area around the graph is called the outer area or outer area . Two embeddings are called equivalent if there is an isomorphic map between the boundaries of their domains.

A graph is called maximally planar or triangle graph if it is planar and no edge can be added to it without losing its planarity.

A graph is said to be almost planar or critically planar if the graph becomes planar by removing any node. Example: K 5 is almost planar.

A graph is called extra- planar (often also outer- planar or circular planar ) if it can be embedded in the plane in such a way that all of its nodes lie on the edge of the same area.

The planarity of a graph can be tested with various algorithms in linear runtime .

The Euler Polyedersatz states that any finite contiguous planar graph with nodes , edges and surfaces of the following equation satisfied:

In a finite connected simple planar graph, each surface is bounded by at least three edges, and each edge touches at most two surfaces. With the polyhedron theorem one can show that the following applies to these graphs:

The set of Steinitz says that of convex polyhedra formed graph exactly the finite 3-contiguous are simple planar graph. In general, the polyhedron substitute applies to any polyhedron whose faces are simple polygons that, regardless of their convexity, form a surface that is topologically equivalent to a sphere .

Related planar graph with more than one edge satisfy the inequality , because each surface adjacent to at least three edges and each edge bounded exactly two surfaces. From the inequality it follows for the average degree of knot

The number of simple planar graphs without numbered nodes increases faster than exponentially with the number of nodes . The following table shows the numbers determined with the help of a computer for : 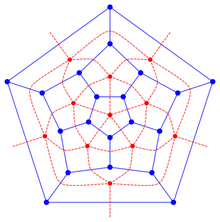 The term dual is used because the property of being a dual graph is mutual, which means that a dual graph of is when a dual graph is of a connected graph . There can generally be several dual graphs for planar graphs, depending on the choice of planar embedding of the graph.

The study of the planarity of graphs is one of the classic subject areas of graph theory and is also often used as a strong prerequisite for propositions. The four-color theorem says that planar graphs can be colored with 4 colors . Triangle-free planar graphs are 3-colorable .