In graph theory, a tree is a special type of graph that is connected and does not contain closed paths ; H. this can be used to model a monohierarchy . Depending on whether the edges of the tree have a distinct and uniform direction, graph-theoretical trees can be subdivided into undirected trees and rooted trees , and for rooted trees into out-trees , in which the edges start from the root , and in-trees , with edges pointing towards the root.

A tree is a forest with exactly one connected component .

Representation of all trees with one, two or three edges in the first mathematical modeling of trees by Arthur Cayley (1857) 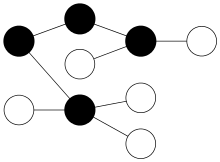 A tree is a connected circular undirected graph . The nodes with degree 1 are called leaves , the remaining nodes are called inner nodes . 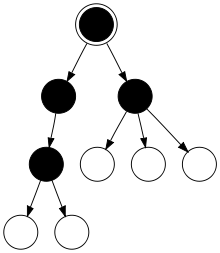 A Rooted tree is a directed from one node of strongly connected circular free graph . The node defining the strong connection is called the root . It has entry degree 0 and is the only node with this property. All nodes with degree of exit 0 are called leaves . All nodes with a positive initial degree are called inner nodes . This is how the definition of an out-tree works .

If the directions of all edges of such a graph are inverted, it becomes an in-tree . This is also seen as a rooted tree.

A finite graph with nodes and edges can be defined as a tree using the following equivalent statements:

In the case of infinite graphs, the third and fourth conditions must be excluded from the equivalence.

Between each pair of nodes there is at least one path, because each tree connected is. If there were two nodes of with at least two paths, then there would be two nodes and on these paths whose paths do not have a common inner node ( disjoint paths ), for example and . Then a circle of would be contrary to the assumption that a tree is.

This can be shown with complete induction . For , i.e. an empty graph with a single node and no edges , holds . By the induction hypothesis , we assume that the equation holds for every tree with nodes. Is a graph with nodes and the nodes of a longest path of . All neighbors of lying on this path , otherwise he would not be the longest path. is the only neighbor of , otherwise it would contain a circle. We remove and the edge from , we obtain a connected graph, because the only neighbor . The resulting graph has exactly one node and one edge less than , i.e. node. According to the induction hypothesis , the resulting graph has edges. From this it follows that the graph has exactly nodes and edges.

If the edge were still connected, then the resulting graph would contain a path from to and would be a circle from .

If after adding the edge it were still free of a circle, then it would not contain a path from to and would not be contiguous in contradiction to the assumption that a tree is.

There are a number of terms that specify trees in more detail. So there is for example

The graphical output of a tree is not a trivial problem. As a general rule, every tree can be drawn in a planar manner, i.e. without the edges intersecting . Depending on the application, there are further requirements for the type of output:

There are different algorithms , the results of which look quite different. Mostly they only solve some, but not all, requests for the output. Well-known algorithms are the HV trees and Walker's algorithm .

There are several labeled trees with knots . This statement is known as the Cayley Formula . The checker code provides a simple proof, which enables a bijection between all possible codes of length and all designated trees on nodes.

If the nodes are not numbered, i.e. isomorphic trees (see isomorphism of graphs ) are not counted, this number behaves asymptotically as with and , as Richard Otter proved in 1948. An exact mathematical formula is not known.

The following table shows the numbers determined with the help of a computer for :

Every undirected , connected graph contains a tree spanning it as a subgraph . Minimal spanning trees have the smallest possible number of edges or the smallest possible sum of the edge weights. The calculation of minimal spanning trees is directly used in practice, for example for the creation of cost-effective interconnected networks , such as telephone networks or electrical networks .

A forest is an undirected graph whose connected components are trees.

An undirected graph is called a -tree if it can be generated recursively as follows:

created by the removal of edges of a -tree: Is a -tree, then with a partial -tree.

By the definition given, partial k-trees always have at least k nodes, which is not always desirable. That is why there is also the following definition:

Another property is that the set of partial k-trees is equal to the set of graphs with tree width at most k.