An octree (from Latin octo 'eight' and English tree 'tree' ) is a data structure in computer science . An octree is a rooted tree whose nodes each have either eight direct descendants or no descendants at all.

Octrees are mainly used in computer graphics to subdivide three-dimensional data sets hierarchically. The root represents all data, each other node represents an octant of the data of its direct predecessor. This makes them suitable for implementing the divide and conquer strategy .

Scheme of an octree. On the left the subdivision of the cube-shaped volume, on the right the resulting octree.

The original volume does not have to be cube-shaped, but can also be generally cuboid. It is also possible to divide the volume into unequal parts. As a rule, additional information about the subordinate nodes is stored in the nodes. So contains z. For example, every node of the special min-max-octree form has the minimum and maximum of the following subtree, which enables efficient searches.

General areas of application for octrees are:

In an Empty-Non-Empty-Octree, either the value empty or non-empty is stored in each node . Empty indicates that the data volume represented by the node does not contain any data worth processing; non-empty accordingly indicates that the associated data volume must be processed. Normally, empty is also the termination criterion for the subdivision; Since the associated data volume no longer contains any interesting information, it is also not worthwhile to subdivide it further. 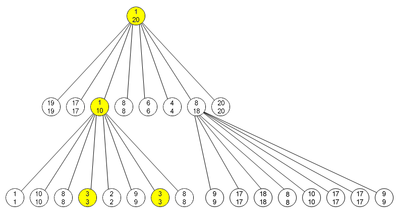 Scheme of a min-max octree. Each node contains the minimum (top) and maximum (bottom) of its subtree. When searching for the value 3, only the data volumes of the nodes marked in yellow need to be searched.

The minimum and maximum of the sub-tree of the node are stored in a min-max-octree in each node. Min-Max-Octrees are therefore suitable for efficient searches based on the example of binary trees. The subtree of a node is only searched if the searched value lies between the minimum and maximum of the node. In this way, parts of the tree can be left out and the search can be accelerated.

For the special case that the minimum and maximum are the same in a node, the search in the subtree can also be left out, because the entire subtree of the node contains the value sought. Normally, the case of minimum equals maximum is also the termination criterion for the subdivision, i.e. the associated data volume is not subdivided further.

Min-Max-Octrees are used, for example, in volume graphics to accelerate the marching cube algorithm. Here all sub-cubes of the octree are searched that contain a given threshold value. This threshold value is a material density for which an isosurface is to be extracted from the voxel data.