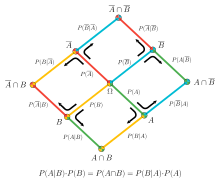 The Bayes' Theorem is a mathematical theorem from the theory of probability , the calculation of conditional probabilities describes. It is named after the English mathematician Thomas Bayes , who first described it in a special case in the treatise An Essay Towards Solving a Problem in the Doctrine of Chances , published posthumously in 1763 . It is also called Bayes 'formula or (as a loan translation ) Bayes' theorem .

the (conditional) probability of the event under the condition that it has occurred,

the (conditional) probability of the event under the condition that it has occurred,

the a priori probability of the event and

the a priori probability of the event .

For a finite number of events, Bayes’s theorem reads:

If there is a decomposition of the result set into disjoint events , then the posterior probability holds true

The last reshaping step is also known as marginalization.

Since an event and its complement always represent a decomposition of the result set, it is particularly true

Furthermore, the theorem also applies to a decomposition of the base space into a countable number of pairwise disjoint events. 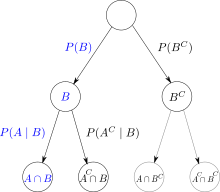 The theorem follows directly from the definition of conditional probability:

is an application of the law of total probability .

In a certain sense, Bayes' theorem allows conclusions to be reversed: one starts with a known value , but is actually interested in the value . For example, it is of interest how high the probability is that someone has a certain disease if a rapid test developed for it shows a positive result. The probability that the test will lead to a positive result in a person affected by this disease is usually known from empirical studies . The desired conversion is only possible if you know the prevalence of the disease, i.e. the (absolute) probability with which the disease in question will occur in the overall population (see calculation example 2 ).

A decision tree or a four-field table can help for understanding. The process is also known as reverse induction .

It should also be noted that conditional probabilities alone are not suitable for demonstrating a specific causal relationship .

There are ten balls in each of the urns and . In there are seven red and three white balls, one red and nine white. Now any ball is drawn from a randomly chosen urn. In other words: whether there will be an urn or a drawing is a priori equally likely. The result of the drawing is: The ball is red. We are looking for the probability that this red ball comes from an urn .

Then:   (both urns are a priori equally probable)

The conditional probability that the drawn red ball was drawn from the urn is therefore .

The result of Bayes' formula in this simple example can easily be seen: Since both urns are selected a priori with the same probability and there are the same number of balls in both urns, all balls - and thus also all eight red balls - have the equal chance of being drawn. If you repeatedly draw a ball from a random urn and put it back in the same urn, you will on average draw a red ball in eight out of 20 cases and a white ball in twelve out of 20 cases (hence the total probability of hitting a red ball pull, same ). Of these eight red balls, an average of seven come from the urn and one from the urn . The probability that a drawn red ball came from an urn is therefore the same .

Is screening the general population regardless of risk factors or symptoms suitable for identifying carriers of the disease? The majority of the tests would be people from the complement of , i.e. people who do not have this disease in themselves: the probability that a person to be tested is not a carrier of the disease is .

denote the fact that the test turned out "positive" in a person, indicating the disease. It is known that the test shows with 95% probability ( sensitivity ), but sometimes also works in healthy people, i. H. delivers a false positive test result with a probability of ( specificity ).

Not only for the initial question, but in each individual case , especially before the result of further examinations, is interested in the positive predictive value called the conditional probability that those who have tested positive are carriers of the disease.

According to the information above, the absolute frequency for 100,000 people is 20 actually sick people, 99,980 people are healthy. The test correctly diagnoses the disease in 19 cases (95 percent sensitivity) of the 20 sick people. In one case, the test fails and does not indicate the disease present (false negative). In probably 1,000 of the 99,980 healthy people, the test will falsely indicate disease. Of the total of 1019 people who tested positive, only 19 are actually sick ( ).

Meaning of the result

The price of finding 19 carriers of the disease, possibly in time for treatment or isolation, is not only the cost of 100,000 tests, but also the unnecessary anxiety and possibly treatment of 1,000 false positives. The initial question as to whether mass screening makes sense with these numerical values ​​must therefore be answered in the negative.

The intuitive assumption that a - at first glance impressive - sensitivity of 95% means that a person who tested positive is actually very likely to be ill is wrong. This problem occurs whenever the actual rate at which a characteristic occurs in the total set examined is small compared to the rate of false positive results.

Without training in the interpretation of statistical statements, risks are often incorrectly assessed or conveyed. The psychologist Gerd Gigerenzer speaks of number illiteracy when dealing with uncertainty and calls for a broad-based didactic offensive.

The following situation is given: is an unknown environmental condition (e.g. a parameter of a probability distribution) that is to be estimated on the basis of an observation of a random variable . Furthermore, prior knowledge is given in the form of an a priori probability distribution of the unknown parameter . This a priori distribution contains all the information about the state of the environment that is given before the observation of the sample.

Depending on the context and philosophical school, the a priori distribution is understood

The conditional distribution of under the condition that assumes the value is denoted below with . This probability distribution can be determined after observing the sample and is also known as the likelihood of the parameter value .

The posterior probability can be calculated using Bayes' theorem. In the special case of a discrete a priori distribution one obtains:

If the set of all possible environmental states is finite, the a posteriori distribution in value can be interpreted as the probability with which one expects the environmental state after observing the sample and taking into account the previous knowledge .

A follower of the subjectivist school of statistics usually uses the expected value of the a posteriori distribution, in some cases the modal value, as an estimate .

Similar to the above, consider an urn filled with ten balls, but it is now unknown how many of them are red. The number of red balls is here the unknown environmental status and as its a priori distribution it should be assumed that all possible values ​​from zero to ten should be equally probable, i.e. H. it applies to everyone .

Now a ball is drawn from the urn five times with replacement and denotes the random variable that indicates how many of them are red. Under the assumption there is then binomial distribution with the parameters and , so it is true

For example for , d. H. two of the five balls drawn were red, the following values ​​result (rounded to three decimal places)

The expected value of the a posteriori distribution results here: