In graph theory, a clique describes a subset of nodes in an undirected graph in which each pair of nodes is connected by an edge. To decide whether a graph contains a clique of a certain minimum size is called a clique problem and, like finding the largest cliques, is algorithmically difficult ( NP-complete ). 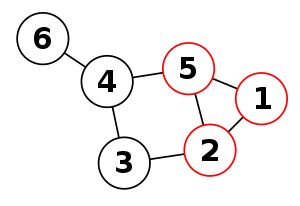 A graph with a clique of size 3.

Let be an undirected graph without multiple edges and a subset of . A clique is a subset of that induces a complete subgraph . If there is a clique, then for the subgraph , where all edges out contain that connect two nodes in , that any two different nodes and out are connected to each other by an edge.

A partition of the set of nodes into pairwise disjoint cliques is called clique coverage of the size . The clique graph of a graph is derived from the cliques .

Directed graphs or graphs with multiple edges are not the subject of such considerations, since the direction or multiplicity of the edges is not important.

For every clique of a graph there is a stable set in the complement graph .

Algorithms for finding and manipulating cliques are in the free Python - Library NetworkX implemented.