Hour angle and declination in the fixed equatorial coordinate system

The hour angle and the declination are the coordinates of a star in the fixed equatorial coordinate system with which its position can be described with respect to an observation point on earth. One speaks of the hour angle because, among other things, it is suitable for measuring time and is therefore usually given in terms of time . It corresponds to the time that has passed since the last passage of the star through the meridian. 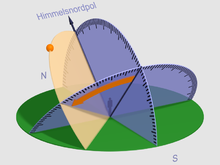 A celestial body with an hour angle of 56 ° from the point of view of an observer at the geographical latitude 42 ° N (hour circle beige; meridian blue; both perpendicularly intersect the blue celestial equator)

The hour angle of a celestial body is the angle between two planes:

Hour angle of some celestial bodies

Most celestial bodies - in particular the stars - seem to move westward in the sky. Your hour angle always increases in a positive direction. Some earth satellites orbit the earth from west to east, with their hourly angle increasing in a negative direction. The hourly angle of geostationary satellites remains constant.

The hour angle of a star increases during a sidereal day from approx. 23 h 56 m (equal to 24 hours sidereal time ) by 360 °, i.e. by 15.04 ° in one hour. Since the sun moves eastward by about one degree per day with respect to the stars, its hourly angle increases slightly more slowly than that of a star. It increases an average of 15 ° per hour (periodic small deviation from the average: see equation of time ). This smooth numerical value follows from the original definition of the hour as 1/24 of a sunny day , the period between two meridian passages of the sun in which its hour angle increases by 360 °. During 1/24 of this period, the hour angle increases by 360 ° / 24 = 15 °.

The hour angle of a star can also be used to measure time. It is equal to the sidereal time that has elapsed since the star's last passage through the meridian .

Due to its suitability for time measurement, the hour angle is often given in terms of time (in hours, minutes and seconds) instead of in degrees (15 ° = 1 hour). This applies not only to the sun, but also to the stars. With the solar time we are familiar with, the angle of the sun changes by 15 ° in one hour of solar time, with the sidereal time used by astronomers, the angle of a star changes by 15 ° in one hour of sidereal time. The time minutes and time seconds used in both cases must not be confused with the arc minutes and the arc seconds of an angle given in degrees .

Equatorial mounts of astronomical observation instruments enable the separate measurement of the fixed equatorial coordinates hour angle and declination. They each have an axis of rotation to follow the change in the two coordinates. If the hour angle changes evenly as with stars, the instrument can automatically track the stars by a drive on the right ascension axis (or hour axis ) parallel to the celestial axis . Because the declination of the stars does not change, the declination axis can be locked when observing them.

The hour and declination axes of the mount usually have a fine movement in order to be able to correct small deviations in the tracking - especially with long-exposure astrophotography . To do this, a bright star is observed on the thread network of a guide telescope . In the case of go-to installations, this can be done with the handheld computer or with a CCD sensor .

The hour angle and right ascension are the corresponding coordinates in the fixed or rotating equatorial coordinate system . The reference plane of the right ascension angle is not the fixed meridian plane, but the rotating plane that is spanned by the great circle through the vernal equinox and the celestial poles. The right ascension is counted positively in an easterly direction - i.e. opposite to the hour angle. The declination is identical in both systems, because both times it relates to the equatorial plane.

The hour angle of the vernal equinox is identical to the sidereal time at the location. It is zero when the fictitious vernal equinox passes the (local) meridian. At this moment the hour angle and right ascension are the same for all celestial bodies, only the signs are different .

The conversion between hour angle and right ascension is described in the main article Astronomical Coordinate Systems.